Aliens Can See Us! 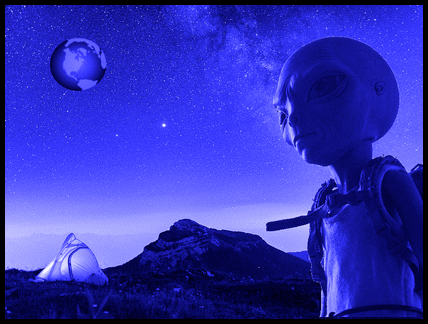 Image: Pixabay​
And that has been scientifically confirmed by a team of Cornell University scientists trying to determine the visibility of Earth from the vantage point of intelligent alien civilizations potentially inhabiting countless of exoplanets that are known to exist within three hundred light-years of our planet.

In a recently submitted paper to the Monthly Notices of the Royal Astronomical Society, astronomer Lisa Kaltenegger and physicist Joshua Pepper reported the extraordinary find after identifying more than a thousand sun-like stars which might have Earth-like planets orbiting within their respective habitable zones:

All of the thousand stars we identified in our paper in the solar neighborhood could see our Earth transit the sun, calling their attention.
Click to expand...

To a nearby alien civilization possessing similar observing capabilities to ours, identifying Earth's life signs could be as simple as using a powerful enough telescope to detect whether our planet has a rich biosphere conducive to life:

They would be able to see signs of a biosphere in the atmosphere of our Pale Blue Dot. If we found a planet with a vibrant biosphere, we would get curious about whether or not someone is there looking at us too.
Click to expand...

The study, funded by the Carl Sagan Institute and the Breakthrough Initiative, aims to create a comprehensive star map that could help us identify where alien life might be located in our cosmic backyard.

Which stars can see Earth as a transiting exoplanet?

ABSTRACT. Transit observations have found the majority of exoplanets to date. Also spectroscopic observations of transits and eclipses are the most commonly use

So basically it is saying that an Alien intelligence that is on the same level (or higher) than ourselves can use the same method we are using when we look for them ?

And if they are on the same level they probably think 'fine, but how the hell do we get there ?'.