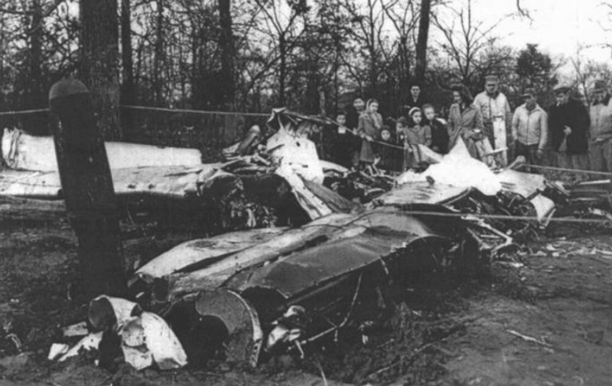 Image: Creative Commons (CC)
​
Sightings of unidentified flying objects are often innocuous and short-lived. The encounters, albeit leaving a memorable impression, are quickly internalized and incorporated into the personal narrative of the experiencers with no lasting negative residua. Other encounters, however, take a turn for the surreal.

On January 7, 1948, an unidentified object was seen in the sky over the city of Madisonville, Kentucky. According to Army Air Field reports, the object was circular, 80–90 metres in diameter "having the appearance of a flaming red cone trailing a gaseous green mist."

Concerned over the strange intruder, the Kentucky Air National Guard ordered 25-year-old Captain, Thomas F. Mantell, to take to the sky on a P-51 combat aircraft to identify the mysterious object. But the situation ended in tragedy. The captain, responsible for chasing the UFO - along with two other pilots - soon found themselves reaching altitudes beyond their planes' capabilities. Thoma's fellow airmen started to descend when they reached 6,900 metres, but for some unknown reason, Cpt. Mantell's aircraft continued to climb to 7,600 metres before stalling and entering into a downward spiral that resulted in a fatal crash.

Official accident reports indicate that Mantell disregarded orders to level his altitude, which caused him to black out from lack of oxygen. His body was removed with great difficulty from inside the aircraft, with his seat belt shredded and the wristwatch on his hand stopped at 3:18 p.m, the exact time of the crash. The reported UFO continued to be seen in the area until around 3:50 pm, when it finally disappeared without a trace.
D

Dundee said:
I wonder of there is any FOI documents that give more information
Click to expand...