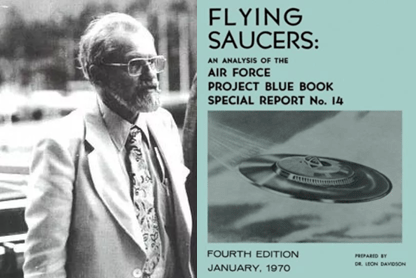 Image: Creative Commons (CC)
​
By late September 1947, the US Air Force was flooded with a series of reports about mysterious objects in the sky that were causing public hysteria. The Air Force, no longer able to ignore the public's confusion and reaction to these aerial interlopers, set out to find out what they were, and quickly launched an investigation called Project Sign (later renamed Project Blue Book).

Wanting to hire an outside expert to sift through the reports they received - they turned to J. Allen Hynek, Director of the McMillin Observatory at Ohio State University. Hynek, then only 37 years old, had previously done some research for the US Government during the war developing new defense technologies, such as radio-controlled fuses:

"One day, I got a couple of visitors from Wright-Patterson Air Force Base in Ohio. They mentioned the topic of flying saucers and asked if I would like to advise the Air Force on this matter. It didn't seem to take too long, so I agreed, ”Hynek said.
Click to expand...

Unbeknownst to Hynek, he was about to embark on an adventure to become one of the most famous UFO scientists of the 20th century.

Hynek's role was to scientifically analyze UFO-related data and determine if they posed a threat to national security. During the time Project Blue Book was in operation, Hynek and other experts investigated 12,618 UFO sightings. According to its final report, about 32% of UFOs were related to astronomical phenomena, another 35% of unidentified objects sightings were attributed to balloons, rockets, flares or birds, with the lasting 33% of UFOs remaining unexplained due to a lack of conclusive evidence.

After Blue Book project ended, Hynek continued to do his own UFO research. In 1972, he published his first book, "The UFO Experience". In 1978, Hynek quit teaching, but he continued to collect and evaluate UFO reports under the auspices of the UFO Research Center he founded in 1973. The organization is still active today. Hynek died in 1986 due to brain tumor, at the age of 75.

"The important thing I get from my father's UFO research is to keep an open mind," said Joel Hynek, son of Allen Hynek, who interviewed witnesses with his father. “You know, humans don't know everything about the universe. There are still physical aspects we haven't figured out yet."
Click to expand...