You are using an out of date browser. It may not display this or other websites correctly.
You should upgrade or use an alternative browser.
S

When I saw the thread title I thought this was going to be a pro 'Drumpf' corner and not Brit politics.
I have no problem with 'conservatives' or 'liberals' as long as they are rational and reasoned about their positions and not simply 'cults of personality' which the American right certainly is these days with their support of Trump- a man who could care less about the working class, minorities , women, and anything resembling truth.
As to Brit aspects I don't know enough about Boris 'Godunov' Johnson or the labor and working class movements and how they affect Brexit to say who's on the correct path over there. As always everyone thinks they have the answer but it's always more complicated in the end.
Reactions: Area201
D

Well I am pretty unaware of the machinations of British or US politics, so my contributions here will be minor. But will watch with interest.
D

Well....we have all seen the machinations of US conservatism at it's worst over the last 4 years with Drumpf and his minions.
That in itself was an education. Boris was..still is?..a fan of Drumpf? I think he did say something negative on Drumpf and his insurrection.
Regarding the 'working class', the conservatives have never done anything meaningful for them here in the states. Things like 8 hour day shift, safety conditions, better pay through unions, social security and medicare (which I now have) ,etc have all been the work of Democrats though some GOP did support various aspects of these programs over the decades.
Republicans have consistently lowered taxes on the rich and corporations while not really addressing similar things for the middle class. To this day the majority of taxes collected annually by the govt come from the middle class and not the upper class who have CPA's and tax loopholes to get around paying their fair share.
Reactions: Area201
S

Dundee said:
Well I am pretty unaware of the machinations of British or US politics, so my contributions here will be minor. But will watch with interest.
Click to expand...

Well i dont really notice much. Difference between if any to my life whoever is in power. They all seem like dick hreads to me.
S

https://currently.att.yahoo.com/att...-065918690.html?.tsrc=daily_mail&uh_test=1_11
"McCain complained that the message from McCarthy was that women who won’t “bend the knee” to Trump have no place in the party.“The leadership in the party is doubling down that Trump is the future,” she said, adding that Republicans lose elections when they count on Trump’s leadership.Now, they are further alienating voters, such as college-educated women.
“It’s the most asinine politics I’ve seen in a really really long time in a cacophony of asinine politics,” McCain said."
S

Could go on for a while 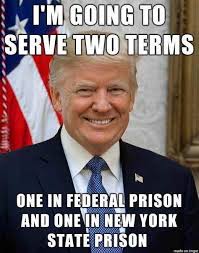 Maybe no pictures, but it does come with the following..

HAL said:
Maybe no pictures, but it does come with the following..

From a Joe Biden fan
D

Skarlett said:
From a Joe Biden fan
Click to expand...

Well...I would think so since Trump doesn't know how to read.
H

It comes up as soon as I click on your link.

Your data. Your experience.​


Yahoo is part of Verizon Media.

By clicking "Accept all", you agree that Verizon Media and our partners will store and/or access information on your device through the use of cookies and similar technologies and process your personal data to display personalised ads and content, for ad and content measurement, audience insights and product development.

Interesting that I don't get that 'warning'....but most links to information and other web sites do that these days...it's not uncommon.
That's a news feed from my e-mail I had at work.
S

https://en.wikipedia.org/wiki/Charlie_Kirk_(activist)#Activism
"According to The New York Times, by "[m]ixing, matching and twisting facts, Mr. Kirk has come to exemplify a new breed of political agitator that has flourished since the 2016 election by walking the line between mainstream conservative opinion and outright disinformation."
Kirk promotes the Cultural Marxism conspiracy theory, and has described universities as "islands of totalitarianism
Kirk has spread falsehoods about voter fraud[27][28] and the COVID-19 pandemic.[29] According to Forbes, Kirk is known for "his repudiation of liberal college education and embrace of pro-Trump conspiracy theories
Kirk spread false information and conspiracy theories about COVID-19 on social media platforms, such as Twitter, in 2020
He was briefly banned from Twitter after falsely claiming that hydroxychloroquine had proved to be "100% effective in treating the virus";[34] and that Gretchen Whitmer, the Democratic governor of Michigan, threatened doctors who tried to use the medication.[1] These falsehoods were retweeted by Rudolph Giuliani whose account was then suspended by Twitter as well
After Donald Trump lost the 2020 presidential election, Kirk promoted unsubstantiated claims of fraud in the election.[37][38] The day before the Washington protest that led to the storming of the United States Capitol, Kirk wrote on Twitter that Turning Point Action and Students for Trump were sending more than 80 "buses of patriots to D.C. to fight for this president".[39][40][41] A spokesman for Turning Point said that the groups ended up sending seven buses, not 80, with 350 students.[39][42] Afterward, Kirk said the violent acts at the Capitol were not an insurrection and did not represent mainstream Trump supporters"
Share:
Facebook Twitter Reddit Pinterest Tumblr WhatsApp Email Share Link
Top Bottom