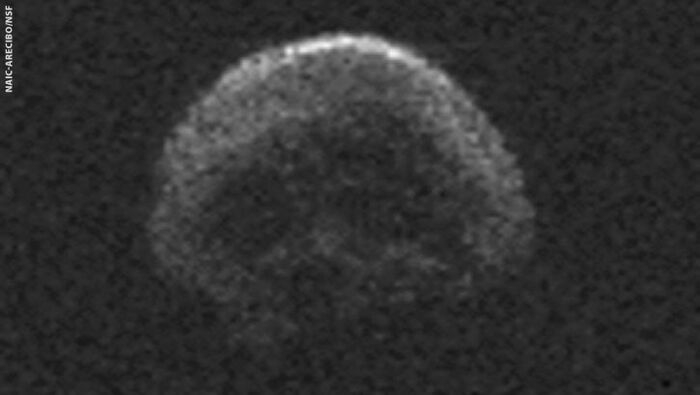 There are spooky things lurking in our solar system. And nothing is more spookier than a space rock in the shape of a giant skull. 2015 TB145, a near-Earth asteroid discovered back in 2015 by the Panoramic Survey Telescope and Rapid Response System (Pan-STARRS) collaboration in Hawaii, is scheduled to pay us a visit once more.

The asteroid, measuring approximately 2,100 feet wide, was dubbed the "Great Pumpkin" after its closest approach to Earth in October 31 of the same year - a date that happened to coincide with the Halloween celebration. The "skull," which evaded detection due to its habit of kickin' it beyond the orbit of Mars, and having a large orbital inclination that places it well below the plain of the ecliptic, makes this particular space rock difficult to track until it is right on you.

Although the 'skull' poses no immediate threat to us, it is scheduled to do another close flyby in 2088 that will bring it to within 0.064 astronomical units (5,900,000 miles) from Earth. Perhaps by then, earthlings will be able to light up a Halloween Pumpkin on its surface.

Where is the skull today? ​
D