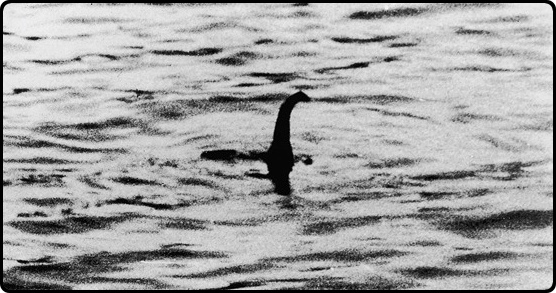 The modern history of the Loch Ness Monster began in 1933 when a new road was completed along the northern shore of Loch Ness, providing easy access to unobstructed views of the water. Soon after this, a couple spotted an enormous animal in the Loch. The <i>Inverness Courier</i> wrote up their...

Haha, what a beautiful legacy, on the one hand he did no favors to anyone who is trying to take it seriously.
But the flip side is he has performed a wonderful service to both the tourism industry, and oddly in one way research into Nessie.
Although this famous photo was fake, imagine how many folks have looked in wonder at it, and perhaps went on to research Nessie and other subject.
To say nothing about the tourism he created.
The bad bit I guess is for me at least, it casts doubts on Nessie's existence. If there was to be a genuine sighting, it risks being lobbed in the same basket as this one.
A

Yeah it's things like this that make it hard for mainstream science to accept cryptozoology has anything other than a pseudoscience......Of course you're always going to have glory hounds screaming "look at me!"
A

The Body of Nessie Found

A reference guide to hoaxes, pranks, practical jokes, frauds, tricks, and other forms of deception.

When watched closely, look at the ripples, looks like a small object in a pond.
A

The humanitarian said:
When watched closely, look at the ripples, looks like a small object in a pond.
Click to expand...

Get right down to it thats most likely what a lot of these Nessie sightings are..Rift raft floating in the Loch mistaken for some ancient creature...
Reactions: The humanitarian
D

This is always what sways me with any, sightings, be it Nessie or UFO's
When the reports predate modern times, and subsequently repeat throughout history.
Perhaps 1500 years ago and possibly later there were still odd pockets of ancient descendants of the dinosaurs still about.
Not to say they are there still though. But perhaps there once really were creatures of this type still not yet extinct.

The earliest written reference linking such creatures to Loch Ness is in the biography of Saint Columba, the man credited with introducing Christianity to Scotland. In A.D. 565, according to this account, Columba was on his way to visit a Pictish king when he stopped along the shore of Loch Ness. Seeing a large beast about to attack a man who was swimming in the lake, Columba raised his hand, invoking the name of God and commanding the monster to "go back with all speed." The beast complied, and the swimmer was saved.

When Nicholas Witchell, a future BBC correspondent, researched the history of the legend for his 1974 book The Loch Ness Story, he found about a dozen pre-20th-century references to large animals in Loch Ness, gradually shifting in character from these clearly mythical accounts to something more like eyewitness descriptions.
Click to expand...

NOVA Online | The Beast of Loch Ness | Birth of a Legend