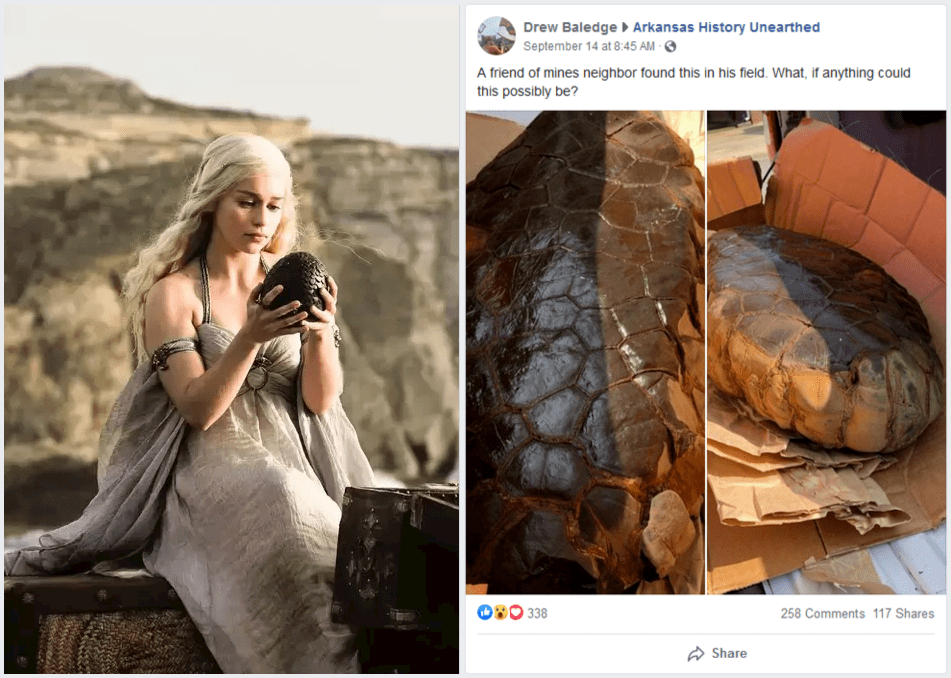 Image: HBO/Drew Baledge via Facebook​
When Daenerys Targaryen of Game of Thrones fame, was given three petrified dragon eggs as a wedding gift from the Dothraki chieftain, Khal Drogo, little did she know that a little love and heat would transform the seemingly inert scaly ova into a trio of too-terrible-to-behold faithful companions that would go onto win many battles for her.

The famous literary work, and its subsequent successful television adaption, must have caused a deeply-rooted impression in the collective psyche of society, for it subconsciously manifested in a recent online post that went viral.

Arkansas History Unearthed, a popular Facebook group whose mission statement is "to preserve local history for everyone to enjoy," was thrown into a frenzy when one of its members posted images of a two feet long (60cm), oval-shaped stony object resembling a giant reptilian or dinosaur egg. Drew Baledge, who announced the discovery to the group, claims that the mystery egg was found in a field by one of his friend's neighbor.

The FB entry immediately sparked an online debate about the possible nature and origin of the egg, with members warning the owner not to bring it inside his house or try to cut it, lest something "alien" should hatch out of it.

In the end, the puzzling unearthing was determined to be a septarian concretion, a geological formation colloquially known as a 'Dragon Stone' for having curious patterns that often resemble dragon skin.

Although sadly no dragon will be coming out of this one - this rare Cretaceous period stone is sought out by gem collectors all over the world for being visually striking when properly polished and displayed. Given the size of this specimen, the find could net the owner a substantial amount in the gem market.
D

Egg, what egg, did that photo have an egg on it

Dundee said:
Egg, what egg, did that photo have an egg on it
Click to expand...

To be honest, it kinda of reminded me of a chocolate iced Long John.