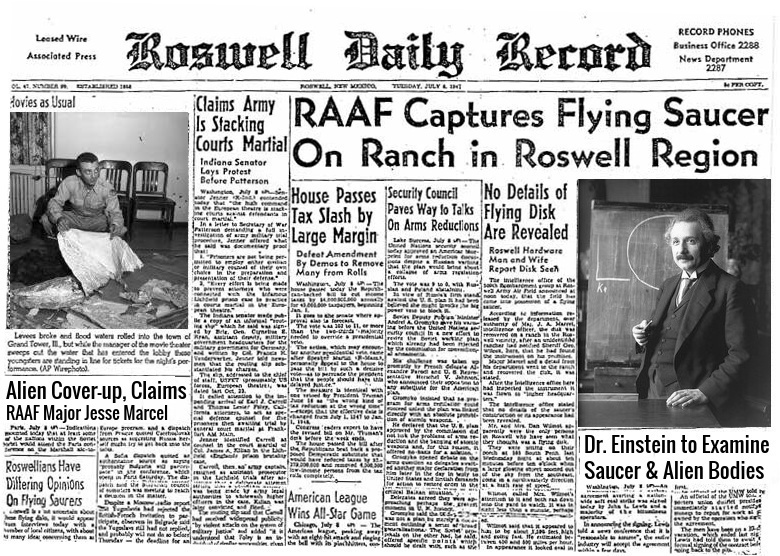 Image: Commons
​
According to an online article by UFO investigator Anthony Bragalia, the father of relativity may have departed this world with full knowledge of an extraterrestrial presence on our planet. Einstein, one of the most celebrated scientists of all times, was allegedly flown to Roswell, New Mexico, at the behest of the highest authorities in the country in order to examine the famous 1947 extraterrestrial ship that crash-landed in the southeastern portion of the state.

The story, found in the private journal of the late UFO researcher Leonard Stringfield, speaks of one Shirley Wright, a former Einstein student and personal assistant at Princeton University who claims to have accompanied the lauded professor on a covert trip to a heavily guarded hangar in New Mexico, where they saw an almost intact alien spacecraft and the bodies of the occupants.

Ms. Wright, who went on to become a scholar in her own right, passed away on July 1, 2015, but not before telling her explosive story to researcher Sheila Franklin, who tracked her down after learning of Strinfield's diary entry where she is mentioned under a pseudonym. The audio and written version of her testimony can be found in the link below.

A decorated Army Air Force Commander and General, Clements McMullen, personally installed his own son to the Roswell base after the 1947 UFO crash to spy on involved personnel.

Albert Einstein was flown to US to look at aliens and UFOs, assistant claims