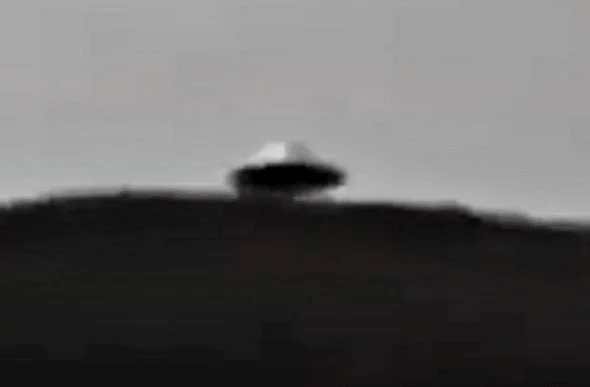 Image: IvanHator TV​
A landed UFO spotted at an undisclosed mountainous location in Mexico is going viral. In the incredible footage - uploaded to YouTube by IvanHator TV - two individuals are seen pointing a telescope at a nearby hill as one of them apparently places a camera in front of the eyepiece to capture what many are describing to be one of the best flying saucer close-ups in recent times.

The craft, closely resembling one of Billy Meier's alleged alien ships, is already stirring controversy among skeptics, who think the video's lack of background information - and the fact that Mexico's news outlets have yet to cover the story - makes the event suspect. What do you guys think? Real, or an elaborate hoax? Watch the video below:

Billy Meier has been in Mexico this whole time?

So many questions.....have they been interviewed? Who are they? What area is that? Has the video been analyzed and are they willing to do that? And why only 1:20 ...why not let the video run until it was out of time?
If you saw a real ufo...would you stop the tape at 1:20?
D Image: IvanHator TV​
A landed UFO spotted at an undisclosed mountainous location in Mexico is going viral. In the incredible footage - uploaded to YouTube by IvanHator TV - two individuals are seen pointing a telescope at a nearby hill as one of them apparently places a camera in front of the eyepiece to capture what many are describing to be one of the best flying saucer close-ups in recent times.

The craft, closely resembling one of Billy Meier's alleged alien ships, is already stirring controversy among skeptics, who think the video's lack of background information - and the fact that Mexico's news outlets have yet to cover the story - makes the event suspect. What do you guys think? Real, or an elaborate hoax? Watch the video below:

No easy way to tell really, doesn't look edited but that doesn't mean it is real either.
I was thinking about these types of videos and paranormal videos. People often say oh the video has been edited, well yeah there are certainly plenty of places that can edit a video to add a ufo or a ghost. But as someone who has been around this stuff for a long time, it is not as easy as you may think. People yell "Photoshop" at every image, yeah OK you try it. I have done a fair bit of it and it is easy to do a half arse job, but it is another thing alltogether to do a convincing enough job that it takes "analysis" to pick it. And all the good software is expensive, Adobe is notoriously difficult to hack. It is cloud based now anyway.

Then you step into video, yeah well go try that too. Industrial strength software like Vegas Pro, Premier Pro, also expensive, also hard to hack, harder to find. Is very bloody hard to do a good job. I did some green screen stuff for my niece and it is just not that simple. So while there certainly are a lot of people out there that could do it, given the propensity of UFO videos, paranormal videos out there, it is silly to think that every person posting them is capable of this kind of video editing. Some are for sure, and surely do. But it is just not that easy. Try it yourself, go try and make even a single convincing ghost photo.
Take a pick of a family member, then add a ghost, watch what happens with Photoshop when the it notices the two images are using different color pallets and are scaled differently. See if you can do it good enough to have it need analysis to be detected. Then try video.
I am not saying all these clips are real, far from it. But the most common opt out for skeptics is to call Photoshop (lol even when it is video) I would hazard a guess that 90% or more of people would not know where to start.

Staff
Wut if they just made a full-size mockup of a saucer and placed it there to film it from a distance? Hard to tell if the UFO is even moving. Seems to be static :-0
D

Yep that would work I did think of that.
It doesn't look edited to me so that would be a likely way to do it. I was genuinely thinking about the photo and video editing thing today and just got a little bit sidetracked.

Staff
It would be nice to know how far the object is to get a feel for its size. It is the nonchalant way that they go about it that makes me question the whole thing. I mean, I would be far more excited lol.
D

Staff
Huh? You're going to spend your weekend analyzing and researching a UFO footage? Why don't you go out on a COVID date instead? I hear they're fun!

I've been single so long I'd go out on a Typhoid date. At the min. Lol

Staff
Hey Dundee, the curse of oak island is back!
D

Staff
Hopefully this season they will find the money pit. The History Channel is uploading some good vids to YouTube. I'm about to watch another episode of Battles B.C.
H

Is there any write up on this story ?

Things like why did the guy with the scope choose to look at that particular bit of distant hillside.

Did they see the thing move ?

Who did they inform etc.

Staff
Not any that I'm aware of. If the sighting is legit, I'm sure some news network will pick up the story and interview the witnesses :-0
H

Too late to change the original.

Staff
Dundee is working on it. I'm eagerly awaiting his report.
D

The video on you tube and pic that Leta posted is by someone called IvanHatorTv.
'He' has a facebook page and you tube site where he seems to post unusual things mostly ufo related. I could not find any other meaningful information on him. So..did he ' take' the video or did someone send it to him?
So many of these things seem to have no good source at all.
D

Well I am calling this one very sus at best.
The image seem to be located originally on igmur.
Had a thourogh hunt trough the metadata from the original but it has been stripped out.
I did reverse image searches and turned up nothing even close.
Some over the water Sydney photoes but these were not unrelated.
The Mexico Daily News seemed to have nothing overly recent other than I searched their archives and found that pic we have all seen of the UFO supposedly going into their Volcano.
But not this pic we have here.

So my conclusion is that it is either it is fake or drew so little interest in Mexico it did not make the papers.
I suspect the latter is possible but unlikely.

I did try to find IvanHatorTV on facebook with the intention of messaging him but when it comes to Facebook I am a nuffy.
I have no posts and no friends as I use it only for the buy sell groups and to laugh at Trump.
So I was not smart enough to Find what Dr Wu Found. The searches seemed to give weird results but that was most liley me.
I could not even find any images on IvanHatorTv'sfacebook presence.