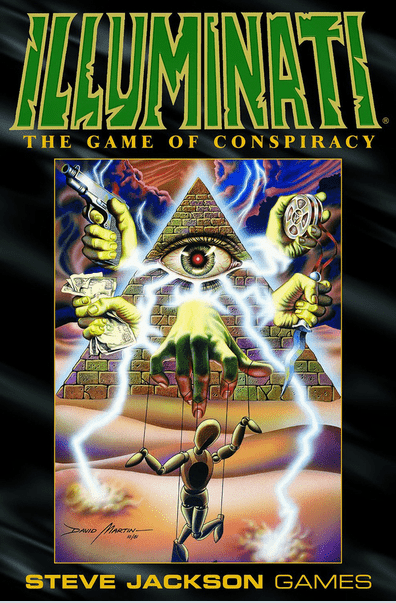 Image: Steve Jackson Games
​
Illuminati: New World Order, an out-of-print collectible card game released in 1994 by Steve Jackson Games (SJG), is the subject of a controversial conspiracy theory. The game, which pits players against one another in pursuit of world domination, bears eerie similarities to some of the darkest events in recent human history, such as 9/11, the COVID pandemic and the Deepwater Horizon oil leak .The game's players, in their role of Illuminati puppet masters, are encouraged to launch all manner of black-ops and false flag operations against their own people in order to create a state of chaos that will eventually lead to increased wealth and power over the masses.

All 330 cards in the game, made in the early 90s, illustrate in remarkable detail a series of events that became reality in our world. This coincidence did not escape conspiracy theorists, who immediately pondered whether the game's creators were some kind of Deep State insiders warning humanity about the global cabal's future evil plans for society. 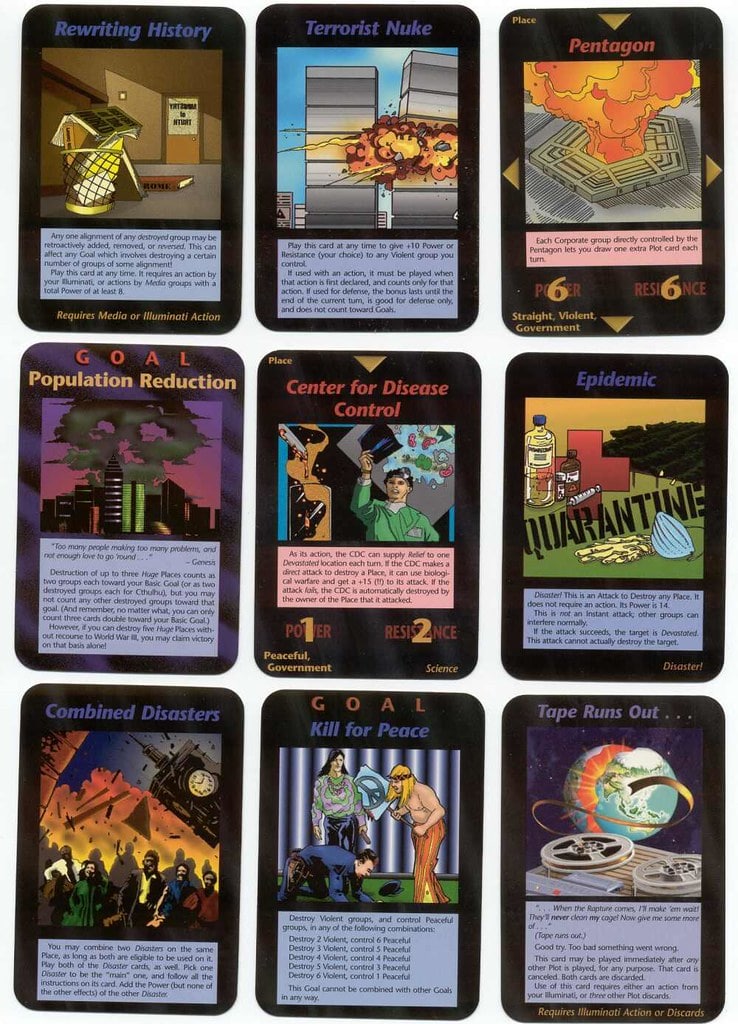 Image: Steve Jackson Games
​
Other parties who also took interest in the game were the U.S. Secret Service and the C.I.A. The former, conducted a raid on the offices of Steve Jackson Games, taking a cache of documents and hard drives in the process. While it is speculated that the raid was due to the uncanny ability of the game to resemble real-world events, trusted sources say the search and seizure warrant was in fact conducted to look for incriminating evidence of files hacked from a government agency. The C.I.A for their part, have made an entry about the conspiracy on their online library for all to read.

When questioned about the oddly prescient narrative of their game, SJG denied any affiliation with, or knowledge of, any ongoing conspiracy and dismissed it as a simple coincidence. But there's no question that the detailed illustrations of the playing cards and their stark association with society's current state of affairs, makes even the most staunch skeptic take a second look.
Reactions: Area201
D

Wow, that's either a major co-incidence or a serious inside knowledge,
I guess though if you cover all bases you are going to get a hit somewhere,

Dundee said:
Wow, that's either a major co-incidence or a serious inside knowledge,
I guess though if you cover all bases you are going to get a hit somewhere,
Click to expand...

I know. Check out the enough is enough card. Some ppl say it is Trump lol 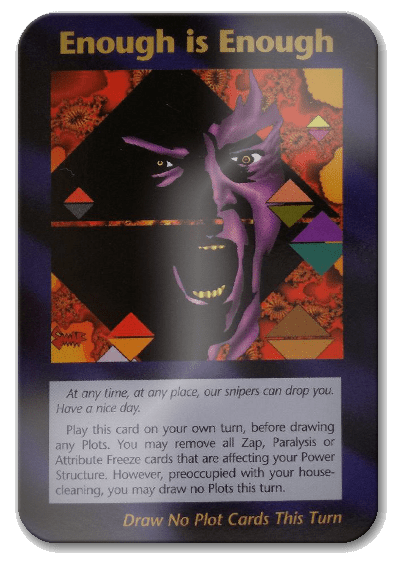 You can buy this on E-Bay believe it or not.

Alien Origins said:
You can buy this on E-Bay believe it or not.
Click to expand...

Yeah...Truther shit can be expensive....
D

Just noticed this older thread....I own a copy of that card set....never played it with anyone but always wanted to..... Over 25 years ago I was interested in all the global conspiracy stuff (particularly the Illumminati tales) so I bought and read most of the better books on the topic and somehow heard about the Illuminati card game so I bought a set at the local comic book shop because they were very interesting.
It's nice to know I have a $600 card game...anyone want to buy it from me..?

Is it unopened and in mint condition stored at a no-pet location? I might consider the offer if these criteria are met and I receive Daddy Trump's second stimulus check :)
D

LETA said:
Is it unopened and in mint condition stored at a no-pet location? I might consider the offer if these criteria are met and I receive Daddy Trump's second stimulus check :)
Click to expand...

It's opened...never played with but I have looked at them in the past...near mint...no pets.
:)

LETA should make a card game about Aliens and UFOs an help promote this site. Kickstarter

Area201 said:
LETA should make a card game about Aliens and UFOs an help promote this site. Kickstarter
Click to expand...

That's a great idea. Or a video game. I must talk with Mick West about it. Maybe he's interested.
Reactions: Area201
D

Back then they were probaly worth $10...no point not to open them since the whole idea was to look and or play with them....

Dr Wu said:
Back then they were probaly worth $10...no point not to open them since the whole idea was to look and or play with them....
Click to expand...

You should have bought two. One to play with and another one as a collector's item. $600 would be coming your way right now :/
D

LETA said:
You should have bought two. One to play with and another one as a collector's item. $600 would be coming your way right now :/
Click to expand...

Hindsight is always 20/20.....and who would have thought a no name game would be worth that much 20 years later..?

Speaking of the Illuminati....anyone have any comments on that old conspiracy? Do they still exist or did they disband back in the late 18th century as history tells us? What about the Bilderbergers , the CFR, and the Committee of 300? Are any of them related to the Illuminati?
H

There is no 'deep state' as such.......imo that is a Republican/right wing meme started by conservative proponents and tricksters to blame for various conservative foibles and use as a scapegoat. ...there are probably many factions or sub groups in the US govt like conservative and liberal groups that have some agenda as well as pro military groups....not sure if i would call those a 'deep state'.
But if such a thing exists I would think it would embody corporate and rich conservative values more than liberal ones.
I will say there has always been rich and powerful people behind the wheels of politics and this goes back a very long way.
Baron Rothschild (https://en.wikipedia.org/wiki/Rothschild_family), once said, 'Give me control of the bank(s) and I will control the governments. If there is anything like a 'deep state' it is one contolled by the very rich who have influenced governments and politicians for a long time.
I would call The Bilderberg group such an influential body.,,,though both liberals and conservatives are asked to their annual meeting. My guess is that The Bilderberg group wish to control as many factions as they can to promote their own cause of world financial control. I believe they are above politics as such and are more interested in simple domination beyond left or right.
They could be a modern version of The Illuminati and possibly even have an historical connection to them.
Some food for thought...: 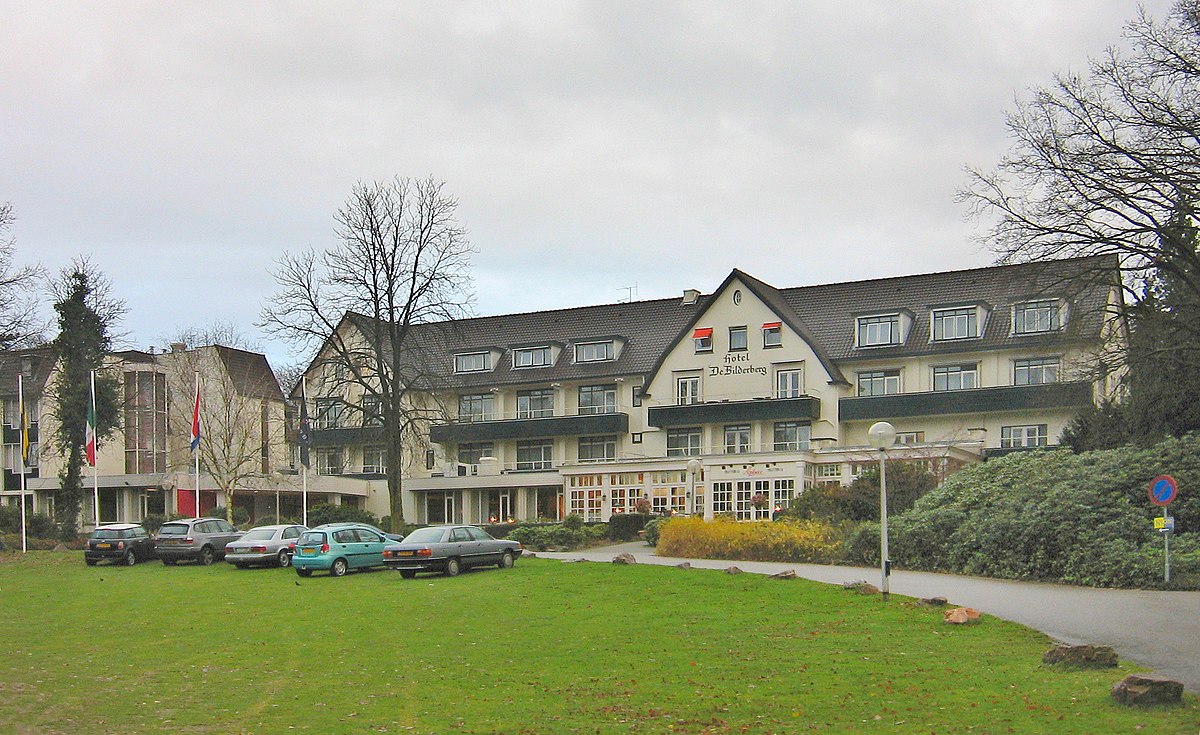