Swirling UFO over A428 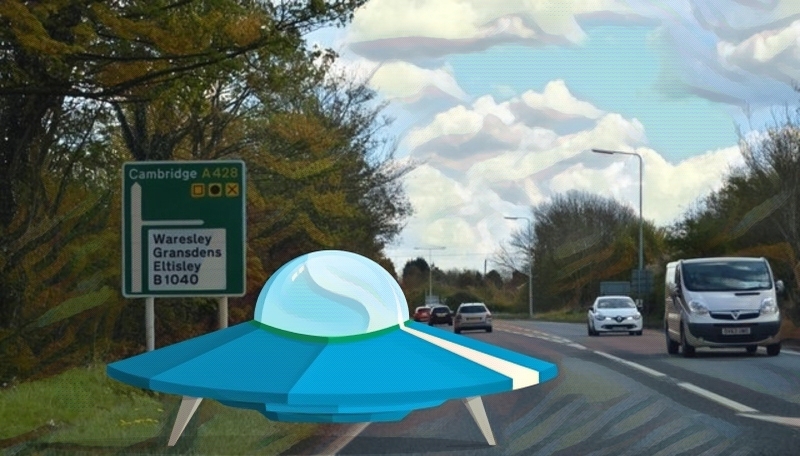 , an important highway in central/eastern England connecting the cities of Coventry and Cambridge, had some incredible UFO activity caught on camera. Kerena, an unfortunate commuter mum who found herself stranded on the side of the road due to mechanical issues with her automobile, was waiting for the roadside help when her son alerted her of a strange light in the sky:

My car had broken down and we were waiting for RAC recovery just off the A428 turning onto the B1041 when my son first spotted it. It was just a flashing light. 'He was like what is that? And I said a plane? He pointed out that it was going round in a strange pattern, definitely not flying like a regular plane heading for a destination. I then wondered if it was a drone? But as he pointed out it was too far in the distance and you would not see that light that far. Next it was making strange fire like pattern trails that were much clearer than the videos show.
Click to expand...

Ms. Kerena, who had the presence of mind to record the strange aerial phenomenon as it developed, later contacted CambridgeshireLive, a local news outlet, to report the sighting. In the captured footage, a luminous object is seen streaking upwards into the sky suggesting a possible rocket or fireworks launch in progress. The object, however, soon entered into a weird circular trajectory that defied a common explanation. Coupled with the strange flight pattern, the UFO also began to spark and leave a fire-like trail in its wake, making Kerena wonder if what she witnessed could be "nothing other than aliens."

Follow the link below to watch the incredible video: