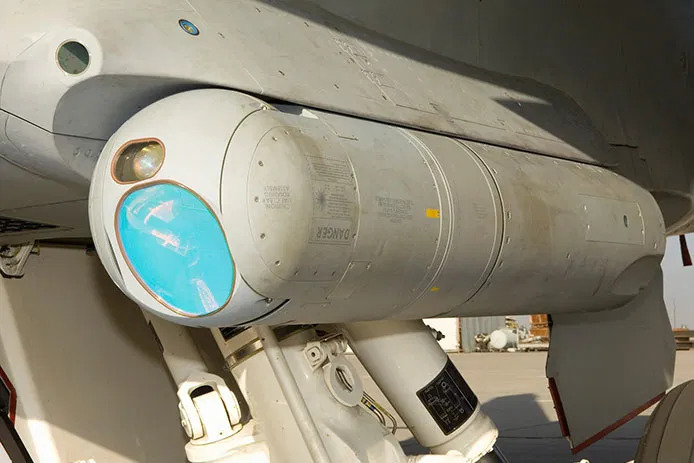 Image: Raytheon​
Today, we celebrate America's Independence Day by having a brief look (mainly, the picture above) at some very American piece of technological ingenuity that made all this fairly recent hubbub about UFOs possible. We are referring to Raytheon's AN/ASQ-228, commonly known as an ATFLIR pod. Back in 2004, one of these targeting pods captured remarkable footage of a fast-moving unidentified object later dubbed the "Tic Tac" by the pilot who made use of this sophisticated electro-optical system to record the odd interloper.

When the classified video went mainstream thanks to The New York Times' article that launched the current UAP revolution, Aaron Maestas, director of engineering and chief engineer for Surveillance and Targeting Systems at Raytheon’s Space and Airborne Systems business, wasted no time in taking credit for the potential discovery one of the company's state-of-the-art instruments collected in the field.

We might be the system that caught the first evidence of E.T. out there. But I’m not surprised we were able to see it. ATFLIR is designed to operate on targets that are traveling in excess of Mach 1. It’s a very agile optical system with a sensitive detector that can distinguish between the cold sky and the hot moving target quite easily.
Click to expand...

The statement above was part of a press release put out by the defense contractor in late December 2017 regarding the Tic Tac UFO and is no longer displayed in Raytheon's webpage, but the quote is a matter of record on various online articles.

Bottom line; this is a darn good piece of equipment your tax dollars are funding. I tore through all the technobabble about the ATFLIR found on Raytheon's website and enjoyed it as a trivial exercise into the arcane marvel of military optics. Needless to say, the next generation pod is sure to provide more 'bang for your buck' and may even solidify the Unidentified Aerial Phenomena Task Force's case for alien visitation.