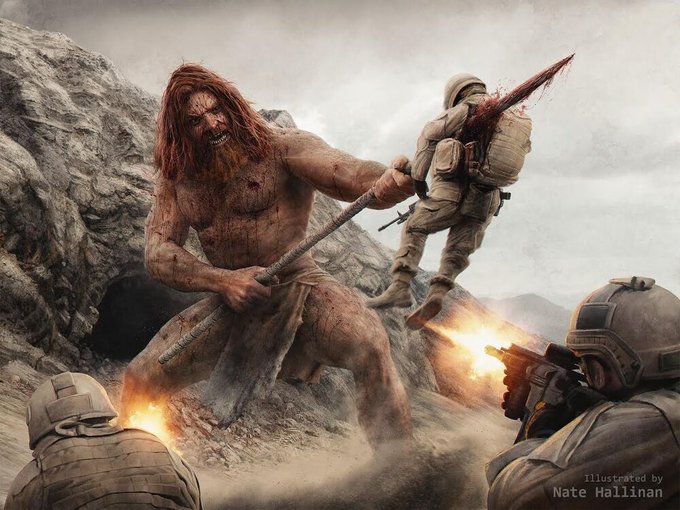 The recent turmoil in Afghanistan brings to mind an apocryphal story that gained much popularity back in the mid 2010s. We are referring to the "Giant of Kandahar." Lore has it, in the days of Operation Anaconda, a U.S. military unit hot on the trail of al-Qaeda and Taliban insurgents mysteriously disappeared in the mountainous regions around Kandahar, Afghanistan's second largest city after Kabul.

After failing to establish contact with the missing troops, a special forces detachment was sent on patrol to look for them when they encountered a mythical creature whose existence was, up to that point, only found in the purview of biblical passages and fairy tale narratives.

According to one of the special forces member present during the bizarre encounter, a humongous man, measuring at least twelve to fifteen feet in height with long wild red hair, emerged out of a cave and proceeded to impale one of the troops with a primitive-looking lance. Surprised by the act of aggression, the team immediately opened fire on the creature, who fell dead to the ground after taking a barrage of bullets to the head and body.

It is at this point that the inevitable cover-up of the events begins. Soon after the battle with the colossal humanoid, the forward operation base dispatched a twin-rotor Chinook helicopter to retrieve the giant's body and spirited it away to some unknown location for further study. The team was also instructed to rewrite their combat operation report and omit the encounter in its entirety.

Although the Pentagon denies this event ever happened, the alleged battle gained a lot of popularity when it was featured on Coast to Coast AM and several other alternative media outlets. Whether true or not, it is undeniable that the story has outgrown its progenitor in stature and fame.
Share:
Facebook Twitter Reddit Pinterest Tumblr WhatsApp Email Share Link
Top Bottom