The Lady of Mars 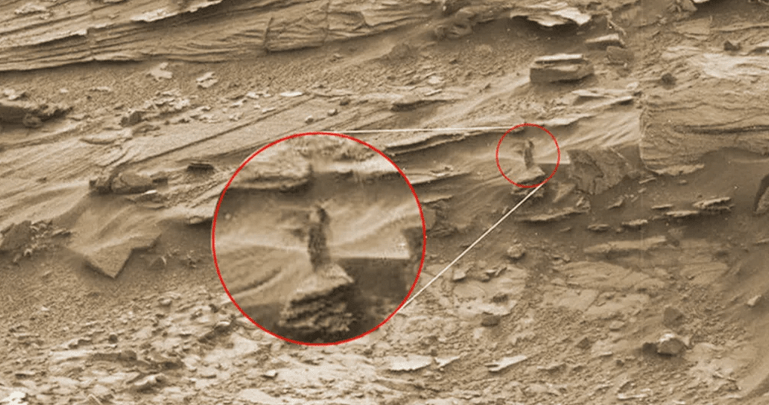 Image: NASA
​
The Mars Curiosity rover has without a doubt stimulated the overactive temporal lobes of those who look for signs of extraterrestrial life everywhere. Patternicity - or the tendency to find patterns in meaningless noise - is a term coined by noted skeptic, Michael Shermer, who cites it as a great evolutionary trait due to its advantageous nature that allows us to identify patterns that may convey useful information about our surroundings. But, as it's often the case, it could also lead us into making erroneous judgments when presented with visual stimuli.

Case in point: a Curiosity rover image where a ghostly figure of what appears to be a woman is seen standing or hovering over a rock formation. Experts who have studied the photo see it as an artifact of light and shadow playing tricks on the viewer's mind. The horizontal rock layers allowing for the object to stand out from its surrounding while vaguely casting a female-like silhouette. But upon further inspection of the Hi-Res NASA image, we find that the so-called "artifact" remains visible and very much noticeable - like a lady from Mars would.
Share:
Facebook Twitter Reddit Pinterest Tumblr WhatsApp Email Share Link
Top Bottom