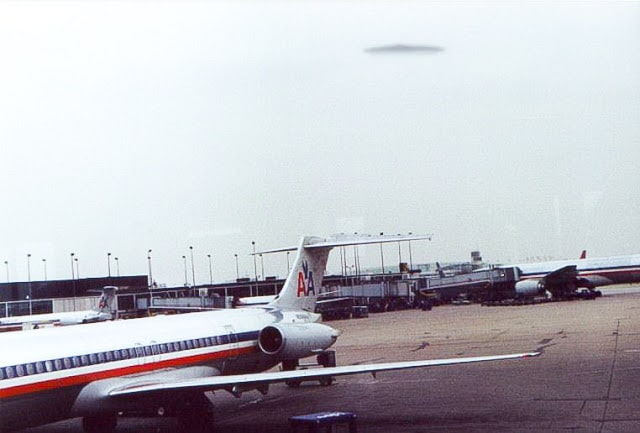 November 7, 2006, was shaping up to be just another day of 'business as usual' at Chicago's O'Hare, until its busy activity was stopped in its track by an uninvited cosmic visitor. At approximately 4:15 p.m, an unidentified object was observed hovering just below the thick overcast over Concourse C, a United Airline's area of operations. A ramp agent, who was in the process of pushing a United flight out of Gate C-17 and into the tarmac, was reportedly the first person to notice the round, silent craft eerily suspended up in the air.

I tend to be scientific by nature, and I don't understand why aliens would hover over a busy airport. But I know that what I saw and what a lot of other people saw stood out very clearly, and it definitely was not an [Earth] aircraft. -- United mechanic who observed the UFO above Gate C-17.
Click to expand...

The UFO, vividly described by a dozen or so airport employees and several independent witnesses, was said to be saucer-shaped, approximately twenty to twenty-four feet in diameter, and dark metallic grey in color. The sighting, which lasted no more than five minutes, was sufficiently long for a passenger inside the terminal to take a photograph of the strange object with his cellphone (see photo above).

The craft, apparently invisible to radar, was not visually seen by traffic controllers nor it registered on any of their instruments. As tensions grew among airport officials over the flood of reports coming in and their inability to identify what was happening over their airspace, the mysterious unidentified object decided to end its brief visit. Witnesses say the UFO suddenly shot straight upwards at such tremendous speed, that it punched a hole in the cloud layer leaving a "clear blue hole" in its wake.
Share:
Facebook Twitter Reddit Pinterest Tumblr WhatsApp Email Share Link
Top Bottom