The People vs. Google LLC 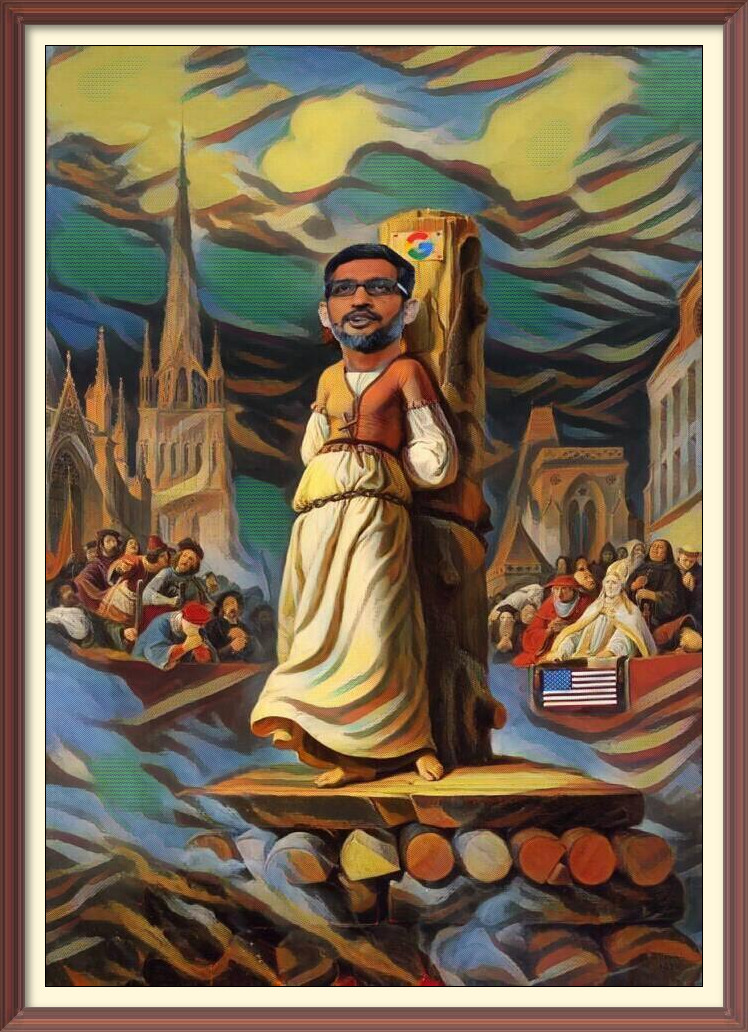 Image: Creative Commons​
The U.S. Justice Department has filed an antitrust lawsuit against the tech giant for unfair competitive practices. Google is accused of allegedly using strong-arm tactics to maintain their monopoly as the leading search engine. The lawsuit describes in detail how the Alphabet Inc. subsidiary used its massive capital to engage in unlawful practices that would force business associates such as Apple, LG, Motorola, and Samsung into binding agreements that prevented them from doing business with Google's competitors.

In a public statement, Google's chief legal officer Kent Walker denounced the legal action as "deeply flawed," adding that "People use Google because they choose to -- not because they're forced to or because they can't find alternatives. Like countless other businesses, we pay to promote our services, just like a cereal brand might pay a supermarket to stock its products at the end of a row or on a shelf at eye level."

Google, who is being actively investigated by nearly all state attorneys in the nation, faces a long legal battle that could potentially end-up costing the tech company billions of dollars in legal fees and a possible unfavorable ruling that would include an order to dismantle its alleged monopoly by forcing it to sell some of its major holdings, like YouTube and Google Adds.
D

I am not a google fan myself. I Don't like Chrome and use Duckduckgo for my searches.
It is not quite as good most times but somewhat more private if you believe the blurb

Dundee said:
I am not a google fan myself. I Don't like Chrome and use Duckduckgo for my searches.
It is not quite as good most times but somewhat more private if you believe the blurb
Click to expand...

It really doesn't matter which browser you use. Snowden said all your online activity is being monitored. I like FF myself, but always use Google for my search engine.
D

I've used Google Chrome for some time now but as Leta said they all keep track of the users...Google (and Amazon, of course not a search engine) are just the biggest ones to deal with but I'm sure FireFox and Bing ,etc also monitor what users do.
If you don't search for 'bad shite' then does it matter?
If you are online....I'm not sure how you can avoid being watched.
H

What tends to be happening is that whatever you wish to search for, be it a recipe for chocolate cake or inventive ways to get to know your auntie, google slap their 'accept our conditions or you can't play' notice on that prevents any further progress.

You fill in your search box, and there is the stopper.

And if you ever get around to reading these conditions you will find that they include virtually everything you can think of.
So it is about time they were slapped down a bit.

It is true that you will always be watched. That in itself is not a problem (not to me) it is that they make money passing on your details to their 'partners' . and there are dozens of them.

I run FireFox on my laptop. And I wanted to use gogoduck as the search engine. I typed this in, pressed enter and the Google demand immediately appeared. Of course I can choose to not accept their conditions. But that means I can't use the browser.

(In US and most western countries) Google made a superior product that took over the market - they pushed out Netscape (dominant browser), Yahoo (the biggest search engine earlier, so Google wasn't first to market), then even Microsoft's Bing got demolished. Then these inferior companies are complaining about Google's efficiency (part of it includes tracking you because that's only way it's so efficient to advertise stuff to you with sellers).

People who have a problem being tracked, just get off Google and go use your DuckDuckGoose or whatever it's called. I welcome the tracking as it benefits my life. If I had many girlfriends, or did illegal stuff, I need them all to not know where I am, okay then I'd use some anonymous software to hide everything.

They are desperate because they can't compete. Same with Twitter. They complain how it's got too much power. Twitter wasn't the first (Facebook status, Friendster, MySpace) all were earlier, they just created better products. These whiners need to come up with something better.

I recently saw a Alphabet (Google) lawsuit payout for users (The People) and it was some $5-10 (some low figure) to each one Take your $5 and go play on DuckDuckGoose.
H

So you missed the ongoing battle in the courts concerning Google's monopoly ? The insistence that their browser be installed on most products as priority.

How do you get on the web to change to duckduckgo if you can't get past Google's pop-up without signing your soul away to them ?
D

Your right of course with respect to what Snowden said, that your being watched whatever you do, and as stated above don't search for bad stuff and you won't get into trouble. However using something a little more private like Duck Duck go may not keep out the bigger more powerful agencies but it will certainly stop or slow down at least the lesser snoops, local goverments, police, councils, I guess even legal trade of your data. For me it is about just pushing back where you can. I don't like googles monopoly on things. Nor Apples. But if your on the net your more often than not forced to comply if you want to function.
I will stick with duck duck go where I can at least and hope google gets smashed in court.
H

I do have DDG on my other Linux machine. And it uses Seamonkey as a browser. But Google even sticks it's nose in there. I believe the have incorporated Seamonkey.
D

HAL said:
I do have DDG on my other Linux machine. And it uses Seamonkey as a browser. But Google even sticks it's nose in there. I believe the have incorporated Seamonkey.
Click to expand...