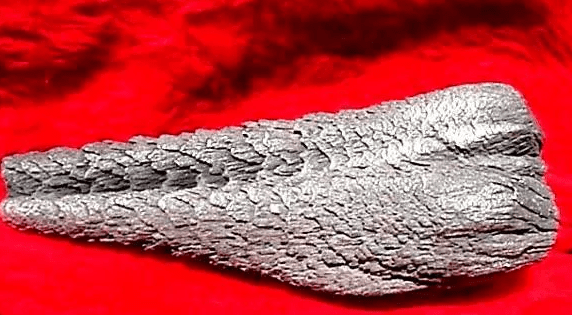 Image: Coast to Coast AM
​
The mysterious object, ejected from a UFO, is now being analyzed by TTSA's Aquisition and Data Analysis of Materials (A.D.A.M.) project as part of their mission's mandate to study samples of materials originating from UAP encounters. The artifact, the only evidence left from an extraordinary close encounter with a UFO craft, was found by one Bob White during a road trip.

In 1987, Mr. White (now deceased) and a female companion decided to embark on a trip to Las Vegas from their hometown in Colorado. When the couple approached the Nevada state line, they saw a large, luminous object hovering approximately one hundred yards in front of their vehicle. As they got closer, the UFO took off at rapid speed, but before it disappeared, it ejected a small fiery object to the ground.

The artifact, later recovered by Mr. White and analyzed at Los Alamos National Laboratory, is said to be composed of Aluminium and thirty-two other exotic metal alloys not naturally occurring on Earth. The head metallurgist analyzing the sample at the lab was so excited about the discovery, that he reportedly said to White that the object was "something I have been looking for all my life. This is definitely extra-terrestrial."
D