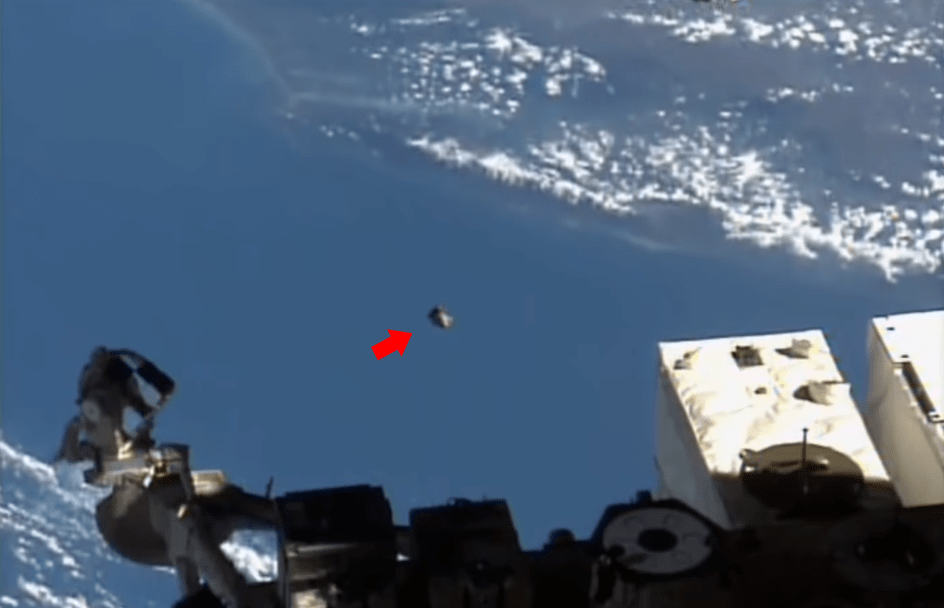 Image: NASA
​
An unidentified object was captured following the trajectory of the International Space Station (ISS). Cameras onboard the modular collaboration tracked the mysterious bus-sized craft for over twenty minutes, which was estimated to be traveling at around 50 miles-per-second in front of the ISS.

The UFO, sporting a distinctive arrowhead shape, does not seen to match any spacecraft in Earth's inventory and it's highly unlikely that a piece of space debri would garnish so much attention from NASA.

The "alien" vessel sighting, originally reported by Scott Waring of ET Data Base, could be part of a top-secret black project being tested in low-Earth orbit by the U.S.

Would have to wonder, if it is a black project you would think the owners would be pretty keen to keep it secret.

Dundee said:
Would have to wonder, if it is a black project you would think the owners would be pretty keen to keep it secret.
Click to expand...

I think it is alien.
A

Pretty much shoot that video in the ass! UFO Sightings Daily! LoL! A site ran by one of the most well known hoaxers in Ufology Scott Waring....! Of course I know some here believe anything they see so we'll let that go...
A

Oh and Leta if you got that off the site itself you better check your computer for malware! Waring loads his site with that shit!
Reactions: LETA
D

And that includes you it seems. Jumping to conclusions. It is not a hoax, but a misidentification, intentional or accidental.

It just goes to show that you are as biased a skeptic as the bloke you bagged out is a believer.

If anyone cares what that thing actually is... It's the Japanese Inter orbit Communication System (ICS) that used to be attached to the ISS next to the large boxes on the payload facility shown in the bottom of the video. The ICS was jettisoned because it was no longer needed. The jettison was described in the ISS status report and it happened around noon on the 21st. That's why the ISS cameras are tracking it, because we want to make sure we know the orbit so it doesn't hit the ISS on a future orbit. https://blogs.nasa.gov/stationreport/2020/02/21/ I know it's not the fun answer but it's the real one. I hope aliens actually visit someday. Feel free to file a FOIA request for videos from the ICS jettison if you don't believe me. You can watch the entire process of grabbing the ICS, lowering it under station and releasing it
Click to expand...

Alien Origins said:
Oh and Leta if you got that off the site itself you better check your computer for malware! Waring loads his site with that shit!
Click to expand...