UFOs not of Alien Origin 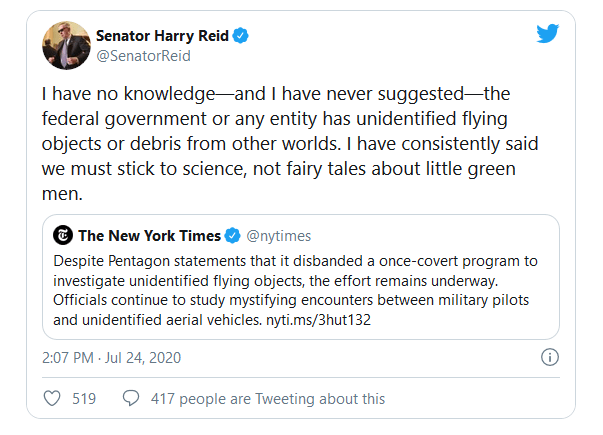 Image: Harry Reid via Twitter​
The New York Times may have been a bit alien-enthusiastic in their latest unidentified aerial phenomena (UAP) article. The famous news outlet allegedly misquoted former Nevada Senator Reid as saying he, “came to the conclusion that there were reports – some were substantive, some not so substantive – of actual materials the government and the private sector had in their possession.” This revelation, coming from a political figure of such gravitas, immediately created a social media storm that propelled the NYTs' article to one of the most quoted ufo-related news of the day.

Senator Reid, however, was not amused with the piece, and immediately issued a statement denying any knowledge that the US is in possession of any craft or debris of alien origin. This caused The New York Times to publish a reluctant retraction to appease the senator while standing by the veracity of the quote.

On a recent interview with George Knapp, Sen. Reid further clarified his position about UAPs stating that, “For me, this has never been about proving other worlds exist. Thousands upon thousands of people have reported seeing unidentified aerial phenomena. ‘Unidentified’ doesn’t mean other-worldly. It means of an unknown origin. I want to find out what this is, where it’s from, what it means to our national security.”
Share:
Facebook Twitter Reddit Pinterest Tumblr WhatsApp Email Share Link
Top Bottom