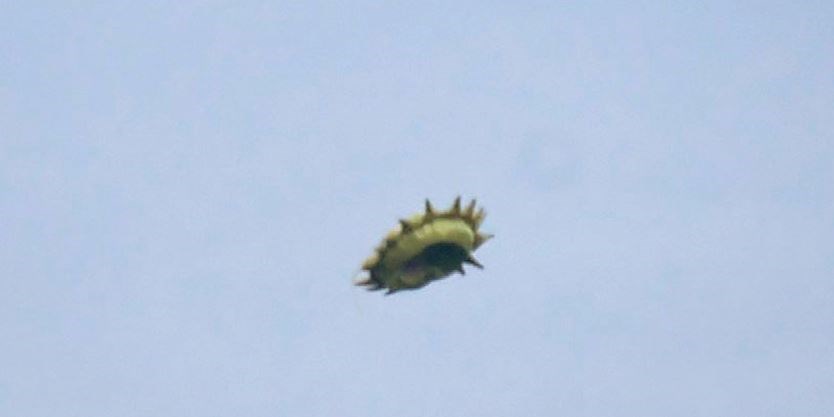 Image: Ken Rice​
For wildlife photographer Ken Rice, it was just another glorious Saturday afternoon out in the wetlands that turned out to be anything but. Second Marsh, a one hundred thirty-seven-hectare marsh located along the shore of Lake Ontario in Canada, is a cherished natural heritage area home to over three hundred plant and bird species and a variety of mammals, reptiles, amphibians, fish and insects.

The region, known for being the seasonal habitat of migratory waterfowl, is the perfect place for a nature journalist to snap that coveted photo that may end up in the cover of National Geographic. But nature decided to take a turn for the bizarre that day.

As Ken Rice was wrapping up his activity for the day, something odd appeared in the sky that compelled him to take just a couple of more pictures:

I was walking back to my car and I just saw something pop out of nowhere, way up high, far away in the sky. It came out of no where, this thing. I thought it was a big turkey vulture so I just took a picture of it anyway and then it kind of hovered, sat there for a minute and then it took off. Wildlife photographer Ken Rice was out shooting photos in Oshawa on June 17 when something unusual suddenly appeared in his camera lens.

The unidentified flying object, described as having a chartreuse color to it and donning a distinctive crown of spikes, left Mr. Rice in a state of wonderment when he carefully analyzed the photos at home. The object's strange shape was unlike anything he had encountered before. After pondering if it could have been some sort of balloon or a loose kite flying about, he came to the conclusion that it was highly unlikely based on the object's motion:

A balloon wouldn’t go that fast and disappear No. 1, and it was too high. Nobody would be flying a kite there because it’s just railroad tracks and the road and there was nobody around there. I didn’t see anybody, and where did it go?
Click to expand...