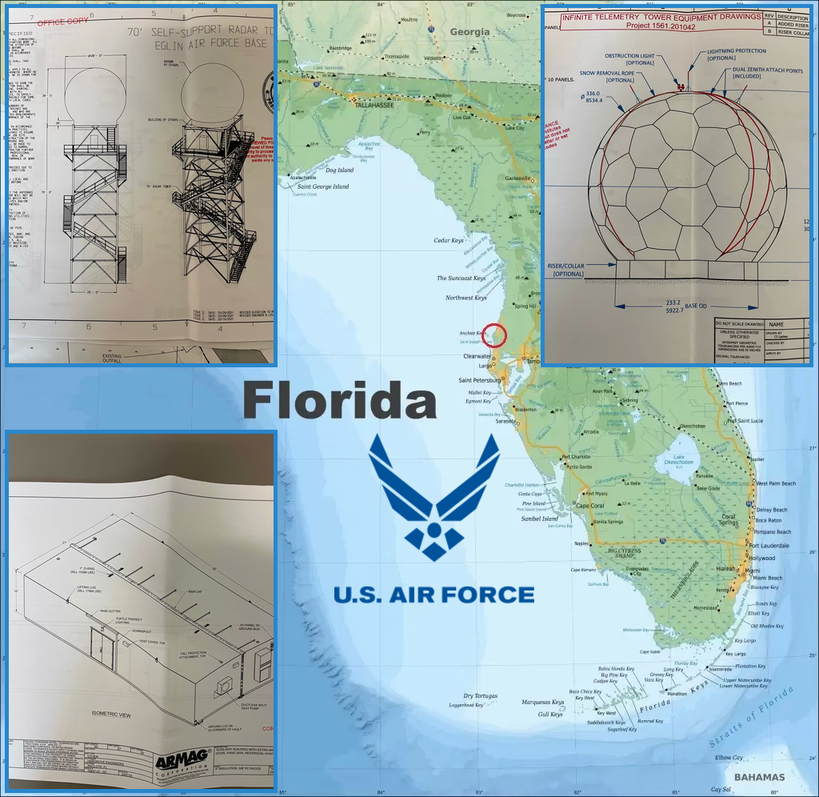 Image: Jeff Robert Blask/Public record​
The Air Force is populating the East Coast with monitoring stations to gather UFO telemetry. The first of these radar sites is being built in Pasco County, Florida. The structures, consisting of a one hundred-foot tower with a radar dome, two fifty-foot collapsable auxillary towers, and an elevated monitoring building with observation deck; will have a 360-degree field of view that will cover a large portion of US territorial waters in the Atlantic and the Gulf of Mexico.

Jeff Robert Blask, who happens to be one of Pasco County's Plans Examiner Supervisors responsible for assessing the safety and code compliance of all buildings in the region, was surprised to see such a massive military facility being built in an otherwise nondescript area. According to Blask, he was taken aback when the chief engineer in charge of the USAF project confirmed to him that the primary role of the stations were to monitor UAP activities:

When I first saw the images of the tower, I said to the Project Engineer, “Wow! Thats some hefty equipment. This is obviously for tracking possible UAP activity that we’ve had around our coasts in recent years.” Now, I half-way said that in jest and certainly did not expect his response.

Almost instantly, he said, “You got it! And as a matter of fact, if you are interested in that subject it may also interest you to know that this facility is not being manned and monitored by MacDill Air Force Base… it’s being monitored in its entirety by Eglin.”

I said, “Wow, that is interesting. I am surprised this project isn’t Classified.”

“The assets themselves are not classified, however the data that will be collected is. Therefore, this facility will be under heavily armed guards and only people with Top Secret clearance will be allowed in.”


He also added that they are contracted to construct several similar facilities along other coastal areas. Needless to say, I was somewhat speechless. First and foremost, he so nonchalantly confirmed what this site was to be used for and secondly, this site is being monitored by Eglin Air Force Base, a large 640 square mile base that’s about 60 miles east of Pensacola; not MacDill our local base here in the greater Tampa Bay Area.
Click to expand...

Pasco County, Florida may not be a popular vacation spot compared to other hot spots in the state but nonetheless it is amongst the fastest growing counties in the United States. As the Plans Exami…

In a previous article, I discussed my “insider” information regarding a new telemetry site along the Gulf Coast of Florida, being manned and monitored by Eglin Air Force Base and its al…