Image: Kevin Day/US Navy​
On November 14, 2004,The USS Nimitz Carrier Strike Group, which included the nuclear-powered carrier and the missile cruiser USS Princeton, were conducting a series of drills about one hundred miles southwest of San Diego, California. Unbeknown to the crew of the Navy vessel monitoring the radar station, their lives were about to change in unexpected ways.

The USS Princeton - which was equipped with a highly advanced radar - had been picking up mysterious objects for several days shortly after the exercise's commencement. Referred by The Navy as "anomalous aerial vehicles" or AAVs in order to avoid the connotation of aliens, senior radar operator Kevin Day found himself in the awkward position of having to acknowledge their presence to the Princeton's senior staff. “Watching them on the display was like watching snow fall from the sky,” recalled Mr. Day on History's Unidentified: Inside Americas UFO Investigation. "I was chomping at the bit,” he says. "I just really wanted to intercept these things." His eagerness to get to the bottom of the mystery on that fateful day, however, would end up costing Kevin a great amount of unexpected grief.

A few hours ago, we learned via social media, that Mr. Day has launched an unofficial complaint against the US Navy on his Facebook page. The explosive entry accuses The Navy and The Department of Defense of unfair retaliation, ridicule, and the loss of career advancement due to the stigma and taboo that these government institutions attach to UFOS/UAPs. In light of the recent confirmation of the UAP phenomenon by said agencies, Mr. Day now expects them to issue a written apology and to be remunerated for lost wages.

Although it is unlikely that The Pentagon or The US Navy will respond to an online post, this could be the beginning of a legal battle that could open up the floodgates to a class-action lawsuit against the government by former and current military personnel who are beginning to speak out about the ongoing culture of silence and ridicule they endure when UFOs enter the picture. Read Kevin Day's post below. 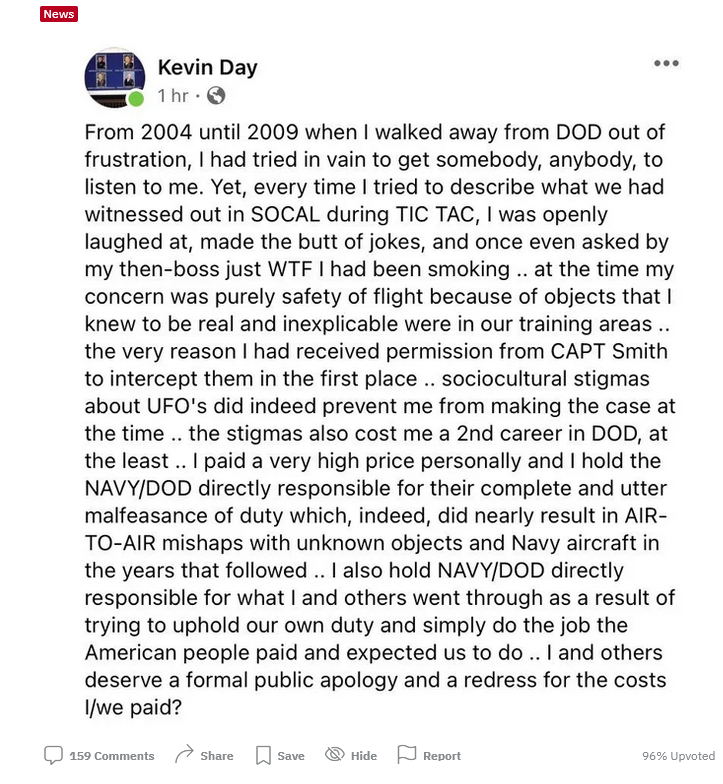 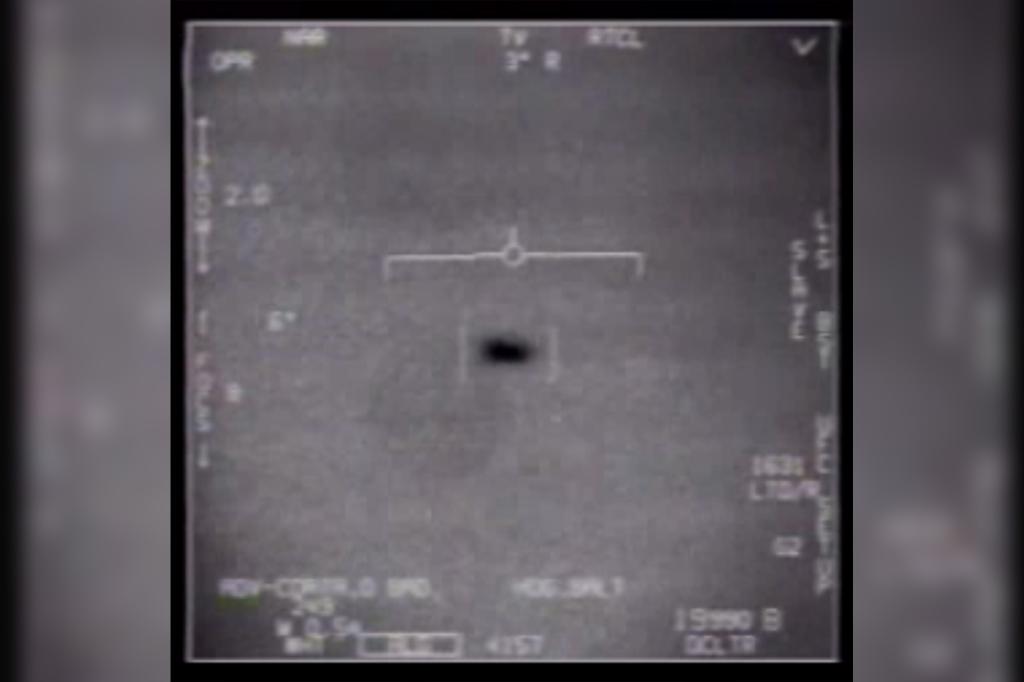 Kevin Day said his career “paid a price” after he was “laughed at, mocked, and talked about behind closed doors within [the US Department of Defense]” for trying to describe… 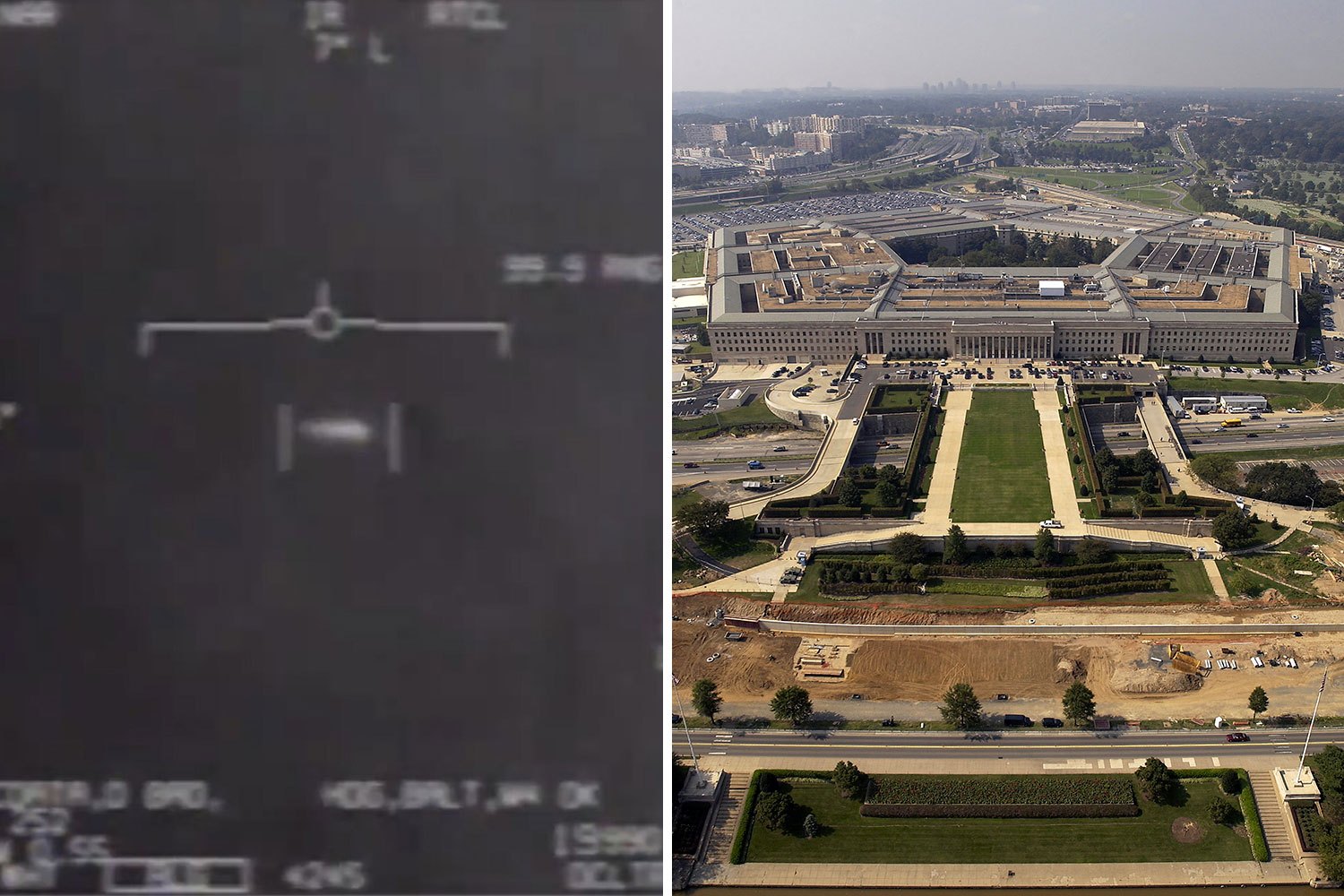 A NAVY veteran who reportedly saw a “Tic-Tac” shaped UFO has demanded a public apology from the Department of Defense after claiming he was mocked and ridiculed by officials. It comes just days aft…
www.thesun.co.uk 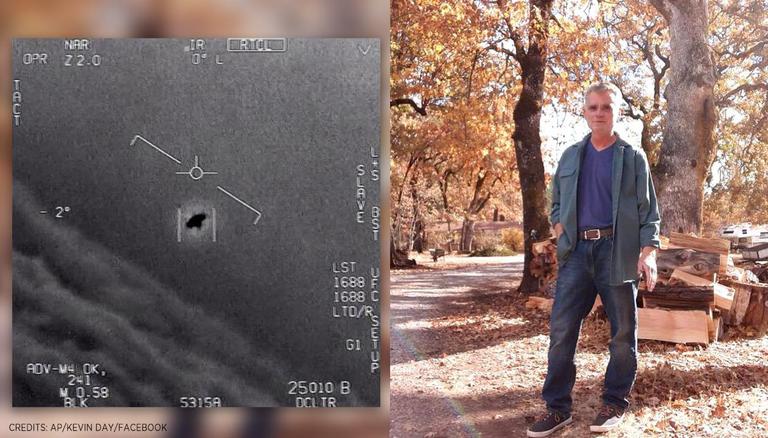 A Navy veteran who was ridiculed over the “white Tic Tac” UFO sightings in 2004 wants a public apology from the Defense Department following the US govt report.

So one would now expect the area in question to be swarming with ships that are there solely for the purpose of finding out what is going on.
D

I expect tha Navy not being research ships wouldn't deploy unless on exercise of a pending threat was present.

Dundee said:
I expect tha Navy not being research ships wouldn't deploy unless on exercise of a pending threat was present.
Click to expand...

I think that is called shooting yourself in the foot.

'Hey guys, there are these things flying about in our secure zones. But they don't appear to be threatening, so what the hell.Just leave them to it'.
D

That seems to be whst hss happened in many cases though