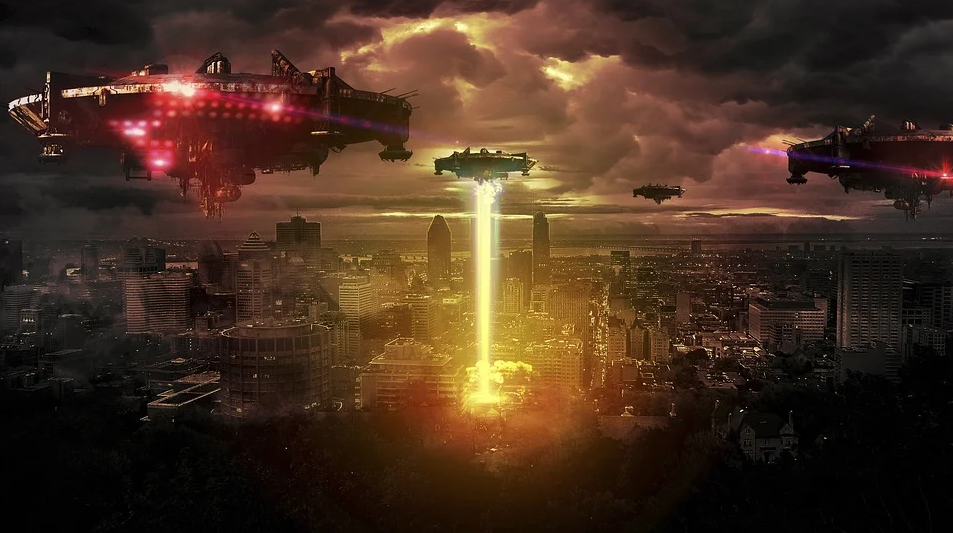 Image: Pixabay​
On a previous thread, we addressed the recurrent myth that interactions with UFOs are always benign by presenting a compelling event of alien aggression entered into the record of US intelligence agencies. Although it is certainly the case that the majority of reported UFO encounters described by civilians are not threatening in nature, the same cannot be said when armed forces personnel get involved and deliberately provoke the phenomenon into a belligerent posture.

Below, we present two interesting incidents where UFOs demonstrated their ability to respond to an act of aggression in kind. Both stories were pulled from the National Investigations Committee on Aerial Phenomena (NICAP) archives and have appeared on subsequent works of UFO literature throughout the years.

In the summer of 1961 near Rybinsk, 150 kilometers from Moscow, new missile batteries were being set up as part of Moscow’s defense network. A huge disk-shaped object allegedly appeared at an estimated altitude of 20,000 meters, surrounded by a number of smaller objects.

“A nervous battery commander panicked and gave – unauthorized – the order to fire a salvo at the giant disk,” reported Fenogho.

Rest of Missles Shut Down

“The missiles were fired. All exploded when at an estimated distance of some two kilometers from the target, creating a fantastic spectacle in the sky. The third salvo was never fired, for at this point the smaller ‘saucers’ went into action and stalled the electrical apparatus of the whole missile base. When the smaller discoidal UFOs had withdrawn and joined the larger craft, the electrical apparatus was again found to be in working order.”

What are we to make of these sensational stories? In translating Fenogho’s original article, Robert Pinotti noted that skeptics would point to the anonymity of Fenogho’s informants and conclude that the reports are a pack of lies. Yet the stories are no more sensational than those reported in the West, and it seems unlikely that a respected journal would have published Fenogho’s material unless there was some substance to it (Above Top Secret”, page 227).
Click to expand...

The test pilot (Apraksin) took off in new aircraft for a test flight and was flying at maximum altitude. The cloud cover in the take-off area was light but when he found himself at Moscow latitude clouds covered the ground. He established communications with Vol’sk and maintained communications with the base at all times. Suddenly an incomprehensible aircraft described as a “flying cucumber”‘, appeared and was flying considerably lower.

Later, it began to descend. The pilot directed his aircraft toward the object and the speeds of both machines were very great and collision appeared inevitable. At a distance of about ten to twelve kilometers cones of light beams were directed at his aircraft. (This happened during his first encounter with a similar object in 1948.)

Blindness set in and the entire electrical portion of the controls was destroyed. The front plastic observation window was damaged and the air-tightness of the cockpit was compromised. Although Apraksin was in a special suit and protective helmet, he experienced a drop in external pressure.

Although he was in trouble, he nevertheless flew the aircraft, gliding it to the earth. Radio communications with the base had ceased. Apraksin landed the airplane on the right bank of the Volga, forty-nine kilometers north of Saratov, with great difficulty and lost consciousness. When he came to, he was in the hospital at the base. Just as in the first instance, the experts arrived from Moscow. He lay in the hospital (in Saratov) for two and half months and then was sent to Moscow.”

It corresponds precisely in time with a Russian launch with ‘classic’ backlighting from the western sun. Sadly, the witness reports neglect to describe the direction that the UFO was observed in. I think Oberg has published something about it.

What appeared to be a cover story by the Russians came out shortly stating that the test pilot was probably just chasing the bright images of faraway satellites.

But this is unlikely, according to Sparks:

“For the satellite to have been visible at those great distances it would have had to have been launched to a height of around 1,000 to 9,000 miles — not 200 miles or so, the altitude of the low earth orbit Soviet satellite launch. …..Well, it wasn’t Kosmos 1310 either, which was not even launched in 1982 but in 1981 (Sept 23). Apparently, someone has confused an approximate time of civilian sightings (of no direct bearing on the military aircraft encounters anyway), with the Kosmos satellite numbering! *
Click to expand...