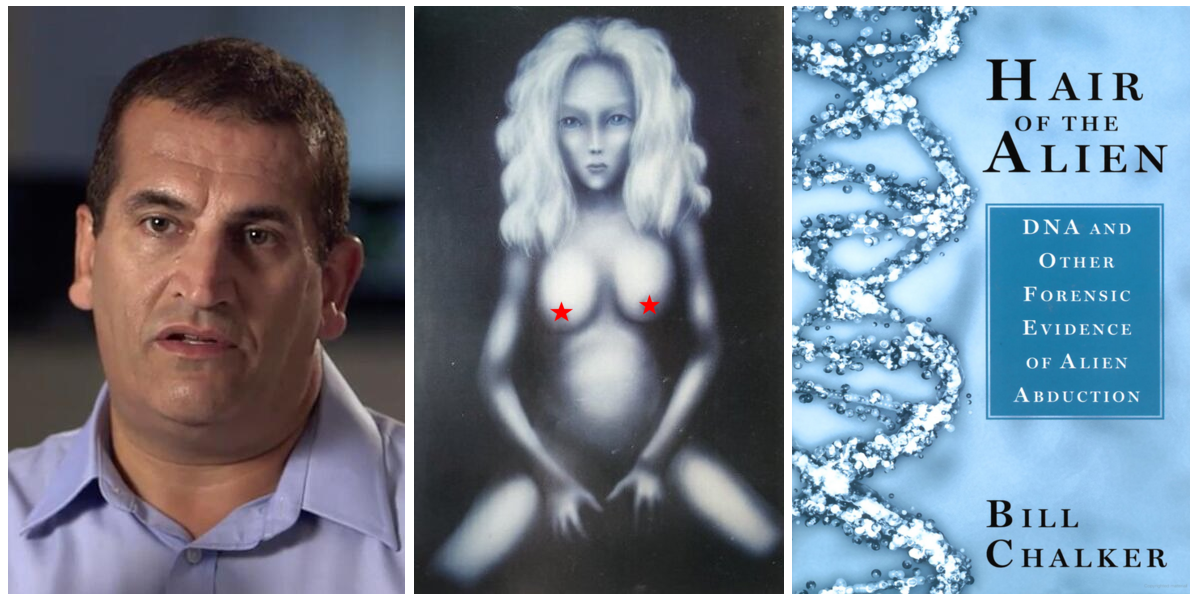 Image: Peter Khoury/Nordic Female/Bill Chalker​
For some time now, experts who study the alien abduction phenomenon have postulated that some sort of covert hybridization program is under way. The extraction of human bodily fluids and tissue can no longer be attributed to a mere scientific curiosity on the part of the visitors, but rather to an extensive DNA extraction and manipulation enterprise which may ultimately lead to a total, silent, and consensual colonization of our planet via the pleasures of the reproductive process. In other words - aliens are conquering us through sex!

As exhibit one, we present the strange case of Peter Khoury. Born in Lebanon, young Mr. Khoury emigrated to Australia with his family in 1973. By 1992, Peter had already settled in his new country and was engaged to his fiance Vivian. It is at this period in his life that a bizarre nighttime sexual encounter took place that left not only an indelible mark on his psyche, but also proof of his otherworldly consort in the form of a blonde pubic hair reputedly belonging to one of his alien sexual assailants.

On the evening in question, Peter went to bed early, only to wake up startled from his sleep by two completely naked women sitting at the edge of his bed. According to Peter, one of the females was Nordic-looking while the other one had Asian features. Both were incredibly attractive, had oversized eyes, and a facial bone structure that could give earthly supermodels a run on the runway.

While this may seem like a dream-come-true for some, Peter was not amused by their uninvited presence or the sexual aggressiveness displayed by the Nordic female, who forcefully tried to get Peter to suck on her breasts. Bewildered by her odd behavior, a brief kerfuffle ensued, and Peter bit off a piece of one of the Nordic's nipples, which didn't cause her to bleed or recoil in pain. Peter - however - went into a violent coughing fit most likely attributed to some type of toxin present in the piece of alien flesh now in his mouth.

Overcome by the cough episode and an overwhelming need to urinate, Peter made his way to the bathroom after noticing that the two females had all but disappeared from the bedroom as if by magic. It is at this point that Peter found the incontrovertible piece of evidence that would support an otherwise unbelievable encounter. Wrapped around his genitals, a blonde pubic hair stood out as a silent witness to what just had transpired. Assuming it to come from the nether regions of the Nordic female, Peter had the quickness of mind to remove the hair from his genitals and place it in a plastic bag.

The alleged pubic hair sample, later analyzed in a laboratory at the prompting of noted Australian ufologist Bill Chalker, yielded some rather interesting results that support the hypothesis that aliens are engaging in some type of fuckery:


I began an investigation into the hair sample, when biochemical colleagues agreed to undertake what was the world’s first PCR (polymerase Chain Reaction) DNA profiling of biological material implicated in an alien abduction experience. The analysis confirmed the hair came from someone who was biologically close to normal human genetics, but of an unusual racial type – a rare Chinese Mongoloid type – one of the rarest human lineages known, that lies further from the human mainstream than any other except for African pygmies and aboriginals. There was the strange anomaly of it being blonde to clear instead of black, as would be expected from the Asian type mitochondrial DNA. The thin blond hair, which appeared to have come from a light-skinned caucasian-type woman, could not have come from a normal human of that racial type. Instead, though human, the hair showed five distinctive DNA markers that are characteristic of a rare sub-group of the Chinese Mongoloid racial type. A detailed survey of the literature on variations in mitochondrial DNA, comprising tens of thousands of samples, showed only four other people on record with all five of the distinctive markers in the blond hair. All four were Chinese, with black hair.

We had the shaft with one set of DNA, and the root showing a different type, and we could not understand it. And eventually, we concluded that this seemed to be the result of some sort of advanced cloning technique. And also we had evidence in the nuclear DNA that this person who needed to hear I guess, you could say, had what appeared to be CCR five dilution factor, which is an interesting property, because it leads you to be perhaps impervious to things like smallpox and AIDS, that kind of thing. So that would be a very handy thing to have. But unfortunately, it’s not shared that widely around the Earth. They have this constellation of unusual DNA properties within one small hair sample. It was bizarre. To keep a very complex story somewhat uncomplicated, what seems to be suggested by the range of findings is possible evidence for advanced DNA techniques and DNA anomalies & findings, for which we are only now discovering or starting to make sense of in mainstream biotechnology.
Click to expand...