Hello Folks,
As fellow lovers of all things Alien, I was wondering if anyone is playing EVE?
It is a great game, incredibly difficult to get your head around. It is a multiplayer massive online thingy? I dunno what you should call it.
The server is a massive incredibly powerful beast that lives in Reykjavik in Iceland
It needs to be powerful, I have been a paying member since 2013 and have rarely seen less than 20 thousand people online, If there is something going on, a war or something, 40+ thousand people is not unusual. It has over 5000 live star systems, each has multiple planets, structures, NPC's, Almost always owned by factions (massive groups of players) It has about 2500 randomly accessible wormholes that take you to... well you never know where.

I did a quick google and only found 2013 stats, but there appears to be up to 500,000 people registered members of the EVE universe.
There is an alliance called Goonswarm that regularly wages war on other alliances. I think they have about 37,000 members.
It has a full on economy that if you want to go that way can translate to real $$ ( I don't ) It has a trading system that makes the real world stock market look like a garage sale.

When asked I tell people that EVE is not a game, it is an alternate and very real Universe. People laugh at those words, but once they look for themselves they always are just dumbstruck with its complexity. You don't play EVE, you move to the EVE universe and commit to a few years there. You cannot drop into EVE and have a bit of a blast for an hour like Battle field.
Anyway, I have been on for 6 years and still consider myself barely more than a noob. Come check it out and have another life in a a very real alternate Universe.

OK so when you hear in the next clip the narrator say that over $300,000 damage was done in game. He is not bullshitting you. Here is a conversion from ISK (EVE Currency) to USD) It is a very real economy. There have been occasions where factions such as Goonswarm force the developers of EVE to make changes to suit their needs. ISK (EVE Money) does translate to real $$$$

Wonder how much is EVE ISK worth in USD? Visit our EVE Online currency price tracker and find out the current ISK Market price as well as the lowest and average price in our marketplace’s trading history for EVE Online.
www.playerauctions.com

I remember a youtube clip of an attack on a bloke a coupl eof years ago, with a massive battleship worth $20,000+ real dollars if he chose to sell it. He was attacked and lost it, Every ISK, nothing to be done, go home and cry. No mercy, people will kill you and dance on your grave while taking your shit and laugh at you as you cry. They will flame and Troll you mercilessly if you give them cause. If you are in nullsec, "YOU HAVE NO COMEBACK" Best to just die, cry silently at home, swear to never play again, then tomorrow night resume the addiction :)

Eve has a universe that is divided into two basic places. Hisec, and Nullsec. Hi sec is usually reasonable civilized (yeah right :) ) . You have laws, police, a full on economy and stock market, trading, mining, industry, exploration and heaps more.

But Nullsec!!! It is truly the frontier, no rules, no police and no mercy. If you venture into Nullsec, expect to die. "YOU WILL DIE MANY MAY MANY TIMES" and lose everything.
But if you survive the rewords can be great. I run two ships, a ship that cloaks and an interceptor. My inteceptor is configured to be fast, and while not uncatchable, it is bloody hard to catch. I do relic sites and data sites to make money, it is slow, but it works. The tradaoff is that my ship may be fast and hard to catch, but I have no offencive capapbility. So If I get nailed, I am dead.

Here is a pic of the in game EVE Map. Each of those little dots is a system that has suns, planets of all types, wormholes, data and relic sites. heaps of stuff. Including sometimes no people, sometimes you warp in ant there is 300 players. In that case I advise you... (run away, run away :) ) Occasionally ther ewill be thousandes if you stumble into a factional war.

OK so here is a screenshot of an in game map.
Remember each dot is an active solar system with potentially heaps of locals, NPC's wormholes...etc

I just arrived back at hisec tonight, I have been doing relic sites for about 4 days. Took me days to warp round the outside of the universe, only did maybe 25% in 4 days. 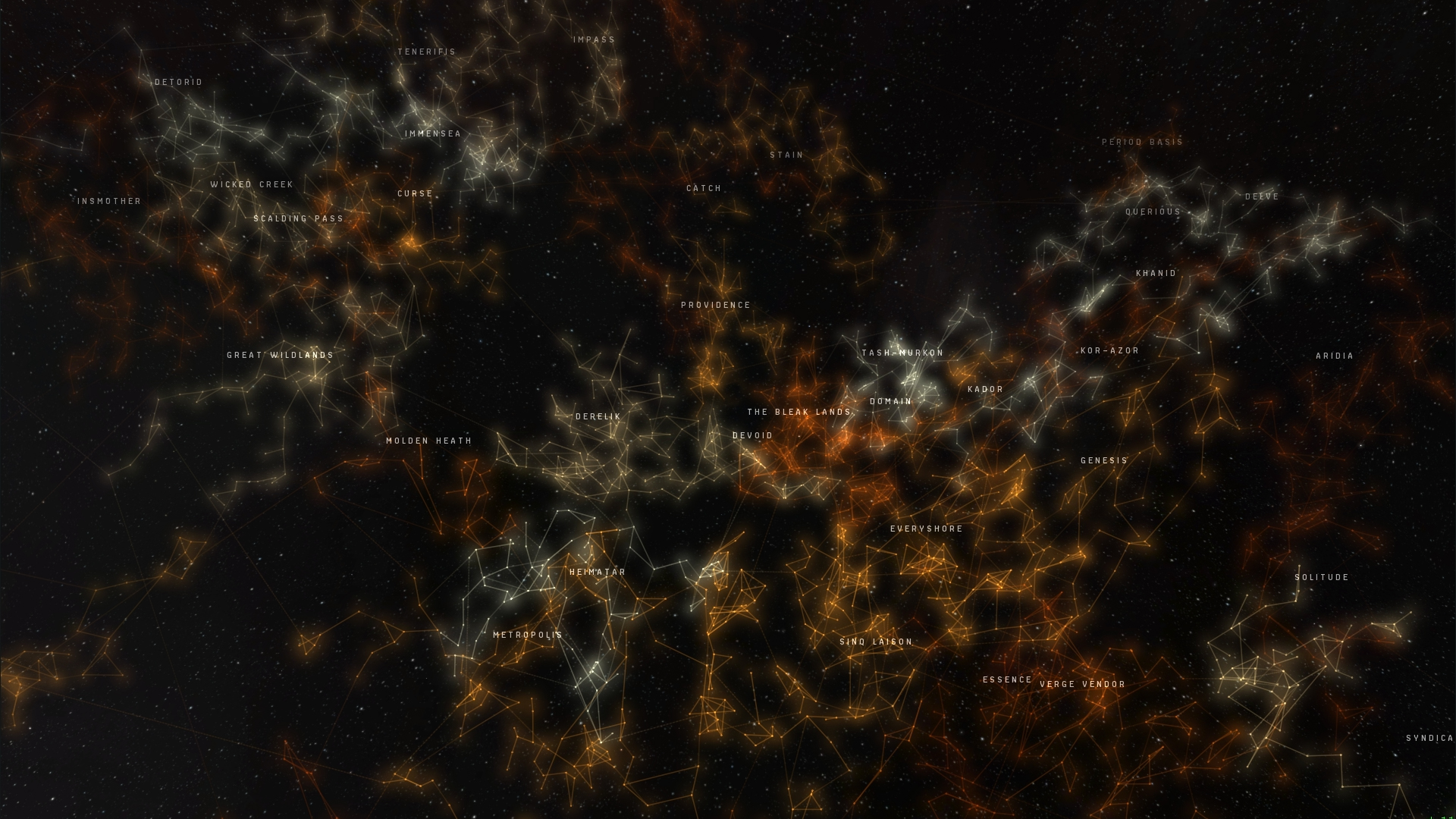 Put on your Peril sensitive Sunglasses's and skip over this.
Don't watch it all, you will die of boredom, however it will give you an idea of the EVE stock market...

If you have made it to here you are interested.
I can't advise you how to get started.
You may think I am talking shit, but after 6 years I am still a novice. I pretty competent one though
EVE is not a game, I hear you calling me a wanker :)
The best analogy I can make is that Eve is like committing to being part of a community.
Like Alien Babble.
You just can't poke your nose into EVE and have a bit of a go.
EVE is a very real functioning online alternate Universe in every respect other than physical space.

One final note for the techies...
Meet the server. 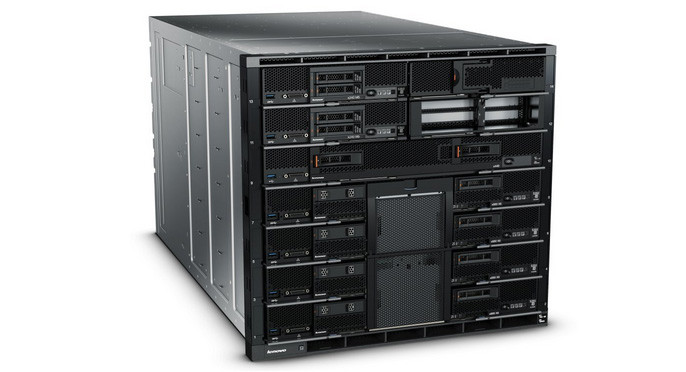 9x800 GB SSD's with a grand total of 83x 1.2TB 10K SAS disks.
Remember this is all mirrored so double these disk numbers for the full picture!
All this lightning fast and redundant storage has to talk to server

The new IBM Flex chassis will have 4x 10Gbit network connections, giving each flex node access a total of 2x 10Gbit throughput.
The servers are connected to the storage via 2498-F48 IBM SAN 16Gbit Switches with everything cross-connected so there is no single point of failure.
With TQ Tech III there will be 6x Everest Nodes.

Keep in mind these numbers are just from active nodes, so the New TQ DB cluster total is double this when we factor in the secondary / passive nodes. 3 TB of RAM for our 2 production DB Clusters--mmmmm, tasty!

Bugger it, read it yourself, here is the link.

See you in Nullsec :)
Reactions: Aurora
A

I'm going to sign up to that when I get a new laptop.
Reactions: Dundee
D

Aurora said:
I'm going to sign up to that when I get a new laptop.
Click to expand...

Cool, if it clicks with you it is a great place to hang out and try to make ISK.
A

I shall one day be rolling in ISK.
Reactions: Dundee
D

Check this, just skip through it!!!!
This involved I think 6000 people online all at once.
There were Generals, and sub commanders, commanding their fleets.
It was incredible.
You should have seen it.