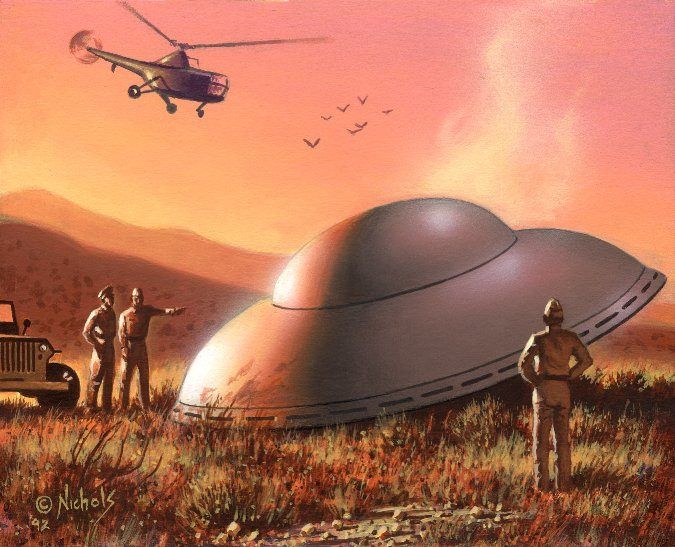 Image: A. Nichols
​
In 1992, an anonymous source contacted several prominent UFO researchers via mail with an amazing story and a cache of "Top Secret Eyes Only" documents containing an official U.S. intelligence report of an extraterrestrial incident that occurred on Mexican soil. The event narrative contained in the above-mentioned documents, describes in detail a 25 August, 1974 crash between a unidentified flying object and a small airplane said to have taken place near Coyame, a rural town in the State of Chihuahua close to the U.S border.

According to the classified report, U.S. defense radar monitoring the southern airspace detected a UAP approaching the continental U.S. from the Gulf of Mexico. The object, traveling at approximately 2,400 miles per hour, was observed to be in a collision course with a small plane en route to Mexico City from El Paso, Texas. The monitoring station tracked both objects until their signals simultaneously disappeared from radar - indicating a possible mid-air collision. Mexican authorities, who were also tracking both targets, immediately mobilized a military unit to the area to search for survivors. According to the report, the U.S. got in touch with their counterparts in Mexico and volunteered to help in the recovery, but the Mexican Government declined the offer.

It is at this point that the story takes a turn for the surreal. According to the anonymous source, the U.S covertly dispatched four military helicopters and a fifteen-man "recovery" team in full chemical gear to the site of the crash despite not having received permission to enter the foreign country. Upon their arrival to the scene of the "accident" in Coyame, the U.S. military team came across the wreckage of a metallic, disc-shaped object and a small Cessna plane. A short distance away from the wreckage, the recovery group discovered a military jeep with the bodies of four Mexican soldiers in it. Their bodies apparently displaying signs of death by "asphyxiation."

The UFO wreckage, states the report, was quickly hoisted by one of the helicopters and flown nine miles north of the crash zone, where a U.S. military convoy awaited to take possession of the alien disc. The UFO craft, according to the files, was then transported to Wright-Patterson Air Force Base in Dayton, Ohio via rail, where it remains to this day.
Share:
Facebook Twitter Reddit Pinterest Tumblr WhatsApp Email Share Link
Top Bottom