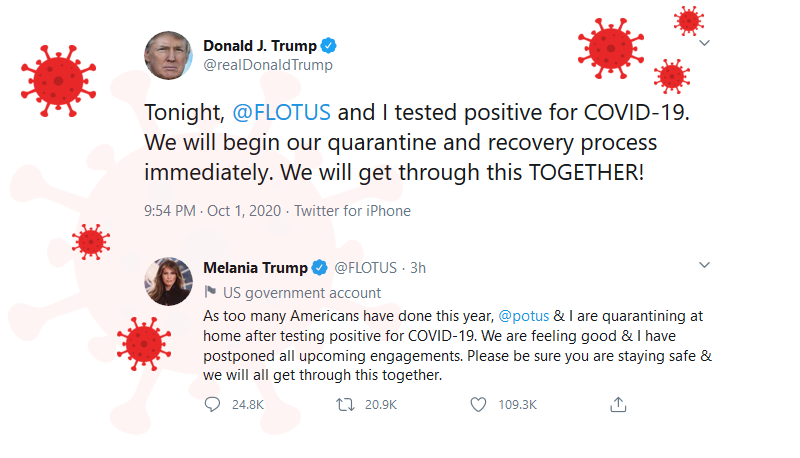 Image: Donald J. Trump/Melania Trump via Twitter/Pixabay​
Kings, just like paupers, are not safe from the COVID pandemic spreading throughout the globe. Earlier this year, Britain's Prime Minister Boris Johnson came close to knocking on the pearly gates after contracting the acute respiratory syndrome that almost put him on a ventilator and made him spend several days in the intensive care unit of a London hospital. Today, we just learned that the virus has struck the highest echelon of power in the US.

Late Friday evening, President Trump announced on Twitter that he and the First Lady tested positive for Coronavirus. As news of the shocking revelation spread, several national television channels interrupted the regularly scheduled programs to inform the public of the developing health condition of the President.

President Trump apparently contracted the flu virus from Hope Hicks, a close aide to the President who was seen recently accompanying the first couple on their campaign rallies across the US. Hicks, who began to show symptoms after coming back from the presidential debate on Tuesday night, tested positive on Thursday, a diagnosis that prompted a panic response in the White House. Although sources say the President is so far asymptomatic, he will nevertheless follow quarantine protocols for the foreseeable future.
D

Bahahaha
I hope he gets so sick as to visit deaths door then recover as payback to his mismanagement of covid in the US.
I hope he recovers but his experience is horrible.
Reactions: LETA
D

Lol. Chicken.
Seriously though. I do hope he recovers OK. But it is ironic that the man who has mishandled the covid crisis. Played down its seriousness and let 200000 people pass away on his watch only ever worrying about votes has got it. Maybe now he is set to experience it first hand will be more inclined to respond more appropriately when he recovers.
Somehow though I reckon he will politicize it to his advantage.
Reactions: LETA

LETA said:
Trump was hospitalized yesterday after showing flu symptoms. He's now receiving an "experimental" antibody serum that destroys or blocks the proteins the virus uses to attach itself to healthy cells.
Click to expand...

He should inject bleach. Somone said that helps. Now who said it?....