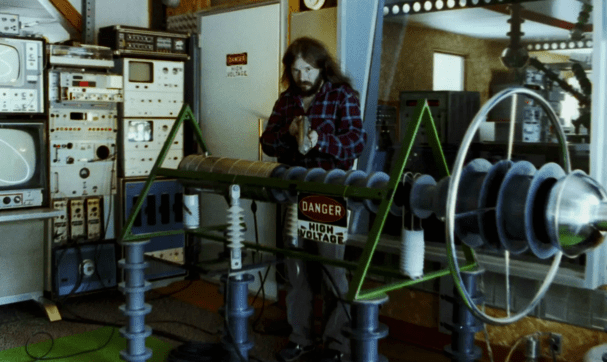 Image: Netflix
​
Learn of the life and works of John Shepherd, an alien enthusiast who for thirty years, tried to contact E.T by sending signals into space from his grandparent's house. John, who grew up in the mid-sixties, became fascinated with the idea of communicating with aliens at a young age. Inspired by The Outer Limits television show, and probably by the awe-inspiring sky of rural Michigan, John embarked in a quest to build an assorted array of instruments (all sourced from military surplus sales and a nearby electrical warehouse) that would allow him to broadcast to the heavens.

Project STRACT, short for Special Telemetry Research and Tracking, was the name given to the ambitious enterprise. Consisting of dual-channel oscillators, cathode-ray tubes, a bunch of large screens, and a low frequency transmitter, John set up shop in and around his grandparent's property. In the yard, he erected a couple of metal towers holding transmitters and receivers. The command centre to monitor incoming and outgoing signals, was strategically located in the living room, where often - in the company of his granny Irene - John would seat for hours listening and staring at a screen for any signs of offworld intelligence.

John, the subject of a Netflix documentary called John Was Trying to Contact Aliens, now lives a quiet life with his life partner in a small town. He ceased all alien-contacting activities back in 1998 due to economic reasons. The remains of what used to be a driven and potential paradigm-shifting endeavor, now seat dismantled in storage as a silent witness of humanity's hunger for confirmation that we are not alone.