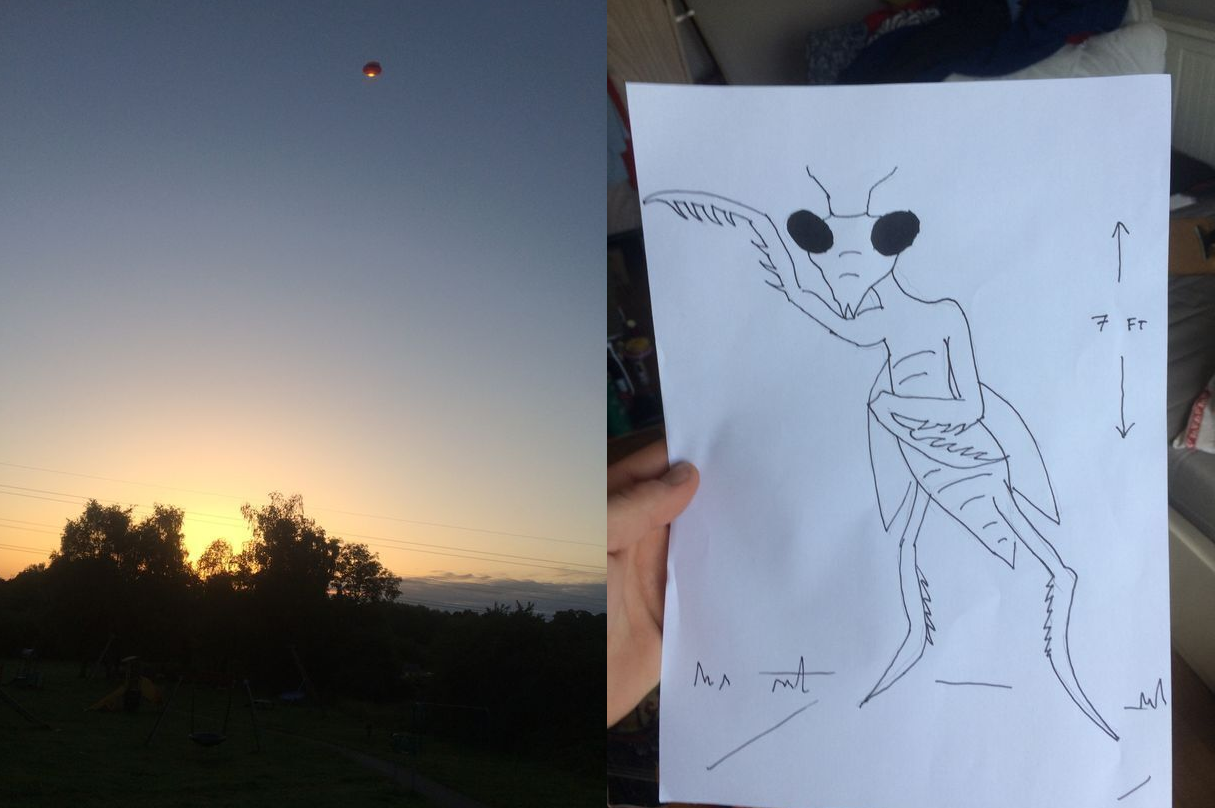 Image: Paul Froggatt​
From the UK, comes the story of a terrifying encounter with a 7-foot cryptid or quite possibly an extraterrestrial entity known as a "Mantid." According to Mr. Paul Froggatt, a twenty-eight year old resident of Warwick, a town in England’s West Midlands region, the disturbing creature appeared to him in the early morning hours of Thursday July 16, 2020.

Mr. Froggat, who was at the time of the incident pedaling back to his home after a 12-hour shift at a local dog food warehouse, recounts seeing a strange, orange sphere in the sky apparently following him. Intrigued by the peculiar sighting, he proceeded to pull out his cellphone and snap a few photos of the object, which at this point began acting up in a manner that Froggat perceived as threatening.

Wanting to put some distance between the unidentified object and himself, Mr. Froggat stepped on the pedals only to realize that the UFO was keeping up with him. As he made his way into a wooded area, the object disappeared from view, but something more terrifying materialized before him. In his own words, Mr. Froggat described seeing "a humanoid praying mantis. This thing was at-least 7 foot tall, light green with triangular head and big oval black eyes. It had all the features of a mantis but stood on two legs and had a somehow human like shape about it."

He then felt "completely frozen with fear. For what felt like an age – but was probably only seconds – I stared into this creature's eyes and it stared back.I felt like it could read my mind and I could read its. My fear was replaced with completely alien thoughts of utter hatred and evil I felt projected from this thing. I suddenly snapped out of this hypnotic kind of state and it made a step back as if it was gonna pounce on me."

EXCLUSIVE: Paul Froggatt, 26, has sketched the ET he claims he saw and likened its 'pure alien hatred' towards him to watching a spider eat a fly on a David Attenborough show