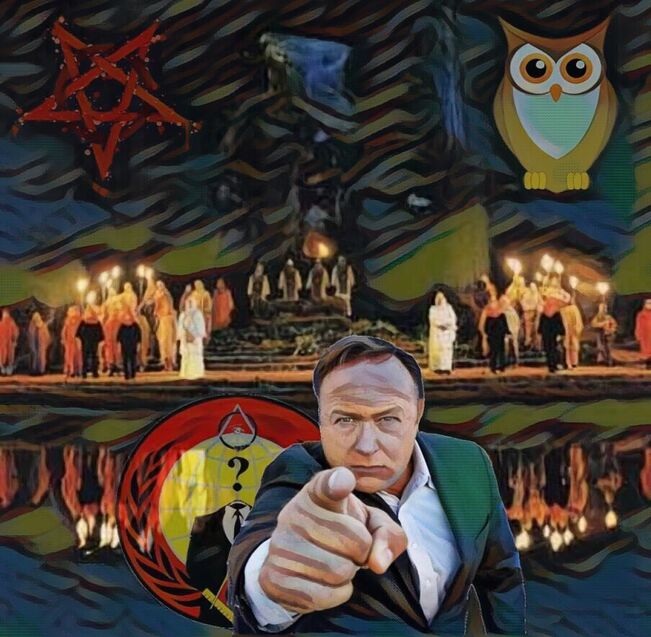 Image: Alex Jones via YouTube​
That is, unless you are a spider whose web stretches far and wide into geopolitical and economical affairs. For this particular elite arachnid, a $25,000 entry fee and a 15-year waiting period will suffice to join one of the most exclusive and secretive fraternity/club in the woods. The Bohemian Grove, ensconced in twenty-seven hundred acres of virgin land populated by majestically tall redwood trees just seventy-five miles north of San Francisco, is the heaven in which the plutocrats of this world congregate once a year to commiserate and forget for a little while the burden of riches bestowed upon them.

The Grove's existence, spanning more than a century, originated in San Francisco in the heyday of private gentlemen's clubs, where the elite would meet for some leisure time after a hard day of pillaging and plundering. The original bohemians, however, belonged to another class altogether. Mostly comprised of newspaper journalists who adopted what many consider to be a precursor to the hippy lifestyle, this group of early bohemians would rent the parcel of private land - which they later acquired - to conduct an annual retreat that soon began attracting the richest and most powerful men in the world.

Of course, no fraternity or club is worth joining if there isn't at least a modicum of mystery and secrecy to it. And in this particular area, Bohemian Grove is second to none. The campground, which boasts of an artificial lake in which shore looms a towering 30-foot concrete owl, is the location where the controversial rituals take place. At the feet of the giant owl, a stone altar sits where once a year, a child-like effigy is incinerated in a ceremony known as the "Cremation of Care" by a group of robed individuals that would make the Druids proud.

The Bohemian Grove, a subject of much controversy, was the recent topic of Brad Meltzer's Decoded, a popular mystery and conspiracy theory television series made by the History Channel. While Meltzer tried his best to quell the outcry of those who think that the campground is the location from which all the evils in this world are hatched out, it is suspected that part of the controversy is kept alive by those inside the secretive and heavily guarded compound, who allegedly enjoy watching the unwashed masses burn with ire while they party hardy and laugh all the way to their literal banks.

I think there is a lot going on we never hear about, unless you are the elite, rich and powerful. They say George W Bush jnr was a Skull and Bonesman well if the voting public knew what he had to do in his initiations they would never have voted him in as President. They say that the 30ft concrete owl ( Moloch ) at Bohemian Grove represents the Canaanite god Baal.
Share:
Facebook Twitter Reddit Pinterest Tumblr WhatsApp Email Share Link
Top Bottom